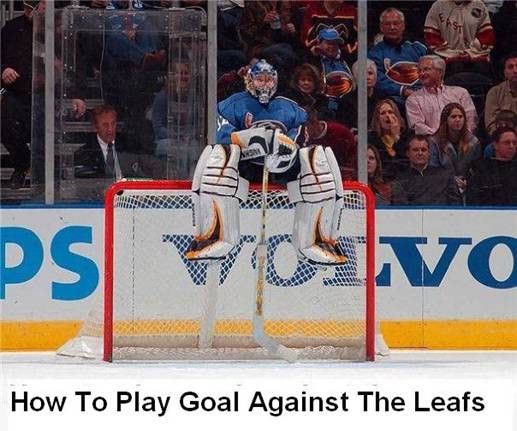 James to me, peter

Good to hear you both made it back from the Eleventh Annual Gathering of the Juggalos safe and sound. I hope your despicable behavior of pelting reality star Tila Tequila with stones and human feces (actual thing that happened) does not carry over to the hallowed graces of The CCFR. With that out of the way, I hath a topic for the table on another matter of indignation and conformity gone mad, The Battle of Ontario.

So Nerds, how do we see this one shaping up this year?

Last year’s battle was a strange one. Over the course of their season long downward spiral toward the boulevard of Tyler Seguin Broken Dreams the leafs did not seem to have much trouble keeping up with or even straight up handling the surprising Sens -surprising in that they didn’t finish in worse than Worst Place in the East ie. below the leafs as was predicted pretty much across the board pre-season last year…So what gives? Even the Colton Orr v. Matt Carkner rivalry started falling in favor of Orr pretty strongly despite an even steven start.

A defeat to the buds is especially painful even just for the over the top taunting that comes with it (none hath more internet muscles than leafs nation) …for me no loss last season was  more awful to watch than the 5-0 thumping in February where Jonathan Cheechoo was our best player that night and Carkner was handed his most decisive loss. And that’s saying something considering I paid 50 bucks to watch a 3-0 loss to Florida. Of course, I would trade a loss in the fan’s only realm of the BofO in exchange for Ottawa making the playoffs and T.O. finishing dead last in the conference PLUS losing their second over all lotto pick annnnnnnnny season BUT …

How does we think it will go? Will Kessel continue to burn us? Will Colby Armstrong make a run at Kessel’s title of most hard to look at leaf face? Is J.S. Gigiwatts going to have a strong year in net or crack under scrutiny? (Side question: is he considered their starter or Gustavsson?)  Will the leafs’ decent blue line compensate for their sub-Saharan dryness up front?

At the CCFR we keep our friends (each other?) close and our enemies (no one knows about this blog) even closer. I’d like to hear some thoughts.

Personally, there is something about this goddamn team when it comes to them bringing a fight to the Senators – I think it can be Ottawa’s for the taking this year should the team be physically healthier – not just injury-wise …remember that game where the team had the flu and Mike Fisher was literally vomiting in between shifts?- but I still think it will be a very, very close series. I hope Carkner has been hitting the heavy bag this summer while watching a looping video of him getting absolutely dummied in his last fight with Orr (the one where he fell holding his hands in front of his face). That was shitty. Go get him Carks! (he’s reading this)

Also, can anyone find stats on last year’s B of O …I surprisingly couldn’t despite the internet being fully available in Canada. Strange.

Peter to James, me

Head to the schedule page on NHL.com and filter by last year, basically Ottawa was 1 for and 5 down to the leafs last year. Losing 5 straight… ugh.

They way I see it, the leafs are still a throwback team to the pre-lockout or dark ages of hockey. The old adage that grit and effort makes up for a lack of talent is all the analysis you’ll get out this biased researcher. They get up for sens games because that’s their playoffs (if they played every playoff game at home). Watch this season, as soon as leaf fans/lsd test subjects start talking about playoffs they’ll forget they need to get live for the sens and drop a few.

Honestly as a tangent, I have little patience for Matt Carkner, as amazing as the side of my head would look wrapped around his fist, he is a marginal AHL player. I enjoy his effort but I’m still not convinced he can play in the league. But he’s welcome to go and spar with any leaf he likes. He’ll win my respect for that but the fact that we still need goons in this league shows me just how little traction has been gained since the lockout.

I think his roster spot would be better served with one of our younger defenceman (sit down Brian Lee, you don’t count)

Well, let’s face it: the Leafs were not as bad last year as their place in the standings might imply. And the Sens might not have been as good as theirs. That’s not to say that the Sens should have lost the last five in a row to them (wow, really…?) but that I see them as relatively evenly matched. Par example, if the Leafs didn’t start the season with Jason Blake as their primary scoring threat and not won a game for 10 or 11 or whatever, and the Sens didn’t go on that 11 game winning streak, I think the difference in points would have been marginal. This can be confirmed or denied with the use of mathematics. Which I decline to employ under any circumstances.

Another theory: the Sens play as well against the Leafs as they do against any shitty team. Which is to say, not very. How many times have we seen them get up for a big game against Chicago or Detroit and then promptly lose to Atlanta or the Leafs? I used to just blame Joe Corvo. Now I wonder if there are magical forces at work. Or if this coffee tables Alfie got for the player’s lounge (true story, I saw it on Sens TV…”Another example of his great leadership”: Chris Neil) aren’t working.

Yet another theory: the Sens are TERRIBLE when they’re on Hockey Night in Canada. And a Toronto – Ottawa game on a Saturday always gets that slot. It’s embarrassing.

The Leafs are better this year (though how they play is anyone’s guess), and the Sens are more skilled but less tough. If this means a return to the days where the skilled Sens would go 6-0 against the Blue Collar leafs with granite hands, I’ll welcome it. But as we all know, winning anything except a playoff series against them won’t shut anybody up.

Ultimately, I just don’t think it’s much of a battle. The Leafs have been awful for years, the Sens are still trying to find their post-Finals identity, and I think there’s more juice to the Pens rivalry, given all the 1st round series these last few seasons. Or Buffalo. Man, the Sens fucking own Buffalo in the regular season. The Sabres are so overrated. (See also: their 1st round destruction by the Bruins.)

As for Leafy goaltending, I don’t think you give Giguere $6M a year and don’t play him at least half the starts. For better or for worse. Man, that was a great comic strip. (“Not true”: Chris Neil.)

Carkner is a character guy, but I have to agree with Pete that it can be hard to see him getting ice time with the glut of guys on the back end. On the other hand, he did score that 3OT goal in the playoffs…I’ll pay $600k or whatever pittance he’s earning for that alone.
top