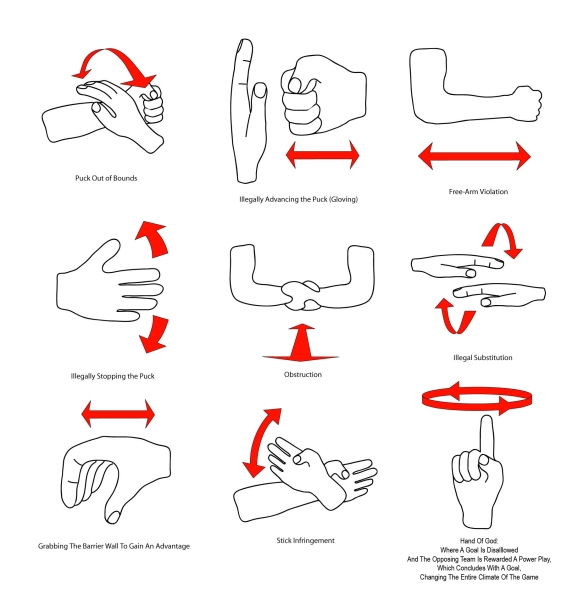 Last night’s game was a weird one. First, let me say that Minnesota, for all of their spending to the cap and not really going anywhere, really have some skill. They spread out Ottawa’s defence with perimeter play and had the passing game to back it up. I read somewhere that they have the same problem as the Sens with consistency – their best lines will whip out some beautiful play on one shift and on the next won’t be able to execute a simple dump-and-chase – but last night they were looking okay. One wonders how well they’d do if they weren’t in a Conference full of murderous juggernauts.

As for the game itself, it was a display of solid positioning and safe plays until, as Steve’s image points out, the Hand of God descended from the Minnesotan skies and He took pity on our poor, struggling millionaires. Minnesota scored (on a pretty passing play) only to have the goal called back because they had too many men on the ice, and the Sens were rewarded a Power Play, which they promptly scored on. Is God a Sens fan? This Kovalev picture might indicate as much. Maybe he just hates the Wild. But I don’t think that I’ve ever seen that. Doubly rare that a Too Many Men penalty would burn anyone but the Sens.

It’s got to be said again: Ottawa, 2 for 2 on the PP last night, 11th best in the league. (Though they have the 5th worst PK%, and take a lot of penalties, so it doesn’t balance out.) If they can learn to deal with teams taking away their space, this team might just turn it around.

Didn’t get a chance to see the match last night. Does “solid positioning” and “safe plays” mean boring? Hockey’s that weird sport where you can have a 2-1 game be as exciting as a 6-5 contest provided you have some solid goaltending. According to the boxscore the Wild managed less than 25 shots so it seems Leclaire was not very busy. Hopefully the entertainment value of the game wasn’t reflected in the boxscore.

So can we decide that maybe Clouston should just play Leclaire until he breaks or untill he gives up 6 goals a game? I think Elliott’s more than aware that he has friends in the front office and that his position with the team is safe. He doesn’t have anything more to prove. Come Free Agency he’ll be able to be resigned, I’m curious as to the market out there for him. Why not finally get your money’s worth from Leclaire? If he gets hurt again, shelve him for the rest of the season. The longer this whole playoff thing drags out the more cloudy the goaltending situation gets.

Bizarre how Ottawa uses goal reviews rather than big penalty kills to change the momentum of a game? Seems like with so many veterans on that team, at least one of them should be able to start chirping on the bench that now would be a good time to put feet to the pedals? Maybe its not so simple?

The game had a pretty decent flow to it, though it was no barn-burner. Ottawa got lucky on a few bounces, but Leclaire played really well. Minnesota didn’t get a lot of shots, but their chances were quality.

I think it’s fair to say that Ottawa will play Leclaire whenever they can. First, they’re paying the guy more than $4M a year – you don’t pay someone almost 50 grand a game (!) to get hit in the face with pucks while sitting on the bench. Also, they’ll want him to raise his value in the hopes that someone takes a chance on him at the trade deadline. Maybe a team with spotty goaltending but hopes of making some post-season noise – Philly, Washington, Tampa Bay – gives Ottawa a 4th round pick for the chance to throw Leclaire in in the last week of regular season play and see if he gets hot.