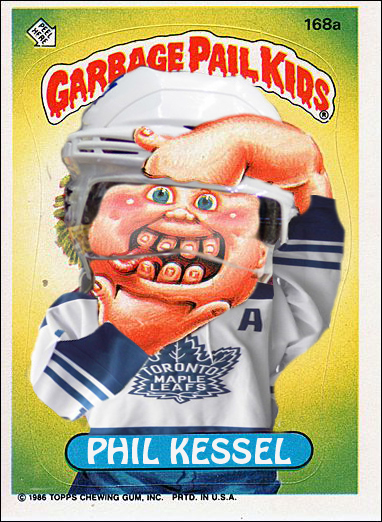 Six wins in a row. The elephant in the room: are we being hopeless romantics to expect this team to make the playoffs this year? Is it just a case of early season wackiness, i.e. the team is only 2 games above .500 and is 4th in the conference? SUB-QUESTION: is this a repeat of the 2009-2010 season when the Sens went on an 11 game win streak and made the playoffs as the fifth seed, but if they’d played .500 hockey through that stretch they would have been a bubble team? Is this an anomalous period to be followed by a crushing return to mediocrity? SUB-QUESTION THE SECOND: Is it better to burn out or to fade away?

I’m tempted to take a more optimistic tone than most of the cautious (read: professional) Sens blogs, who are all predicting the wheels to suddenly and irrevocably come off the wagon at some point. The team is playing their system, and MacLean is rolling with whoever is giving him the most at the moment but without mixing up the lines, which is refreshing. Sharing the load with the vets seems to be working. (Remember when Clouston played Alfredsson 37 minutes a night?) Also, if Rundblad becomes as good as Karlsson is now, holy sheeeeeeeeeet will this team be fun for years.

Basically, I’m just getting a greater appreciation for the inherent funk-upness of the NHL itself, and its totally capricious, unfair, God’s Dice style chaos theory. You know how you’re playing the latest version of NHL for whatever your respective electronics totem is (now: with sneezing on the bench! *hands over $70*) and you sim a few games and think, “Pshaw, EA’s likelihood calculators are so skewed. Edmonton in first place? Toronto leading their division? Ottawa in 4th? Colorado and Dallas ruling the West? Detroit in a funk? Columbus finally spends more money and automatically becomes the worstest? Defending champs can’t string together two wins to save their life? EA has some work to do on their algorithms.” (Also, Vancouver always trades one of the Sedins.) Well, I’m starting to think that the kids they have working there for $12 an hour are probably just like “Fuck it.” Both because they make $12 an hour, and also because the NHL is like Road Warrior out there. Totally unpredictable. So we’re living in a zen moment right now, total kismet. I hope they have overstock of whatever incense MacLean is burning in the dressing room.

Happy Halloween everybody. Blessedish be the time of year when you get to go to a party that involves sweating profusely under a mask and/or uncomfortable clothing all night.

So let me start off by saying “Man, I love being a turtle!” as in, 6 game win streak really hitting the spot right now. A win streak that now includes beating the maple loaves at home in front a building half full of people who’s dad liked the maple leaves so they feel compelled to cheer for the team of another city and that hasn’t done anything since they had to slug it out through TWO whole rounds of playoffs nearly a half century ago in a league of six teams. What? “I put a lot of money up IM HATIN” – Ghostface Killah.

AAAAAAAAAAAAAAnyway, I will be my regular gutsy self and weigh both sides of the equation. New coach, new players, new town, new red, new army. Branding, RIGHT GUYS? I’m thinking maybe these guys are starting to gel a little bit out there. Sure there is still a core of vets from years past but over the course of a couple of months the Sens went from being one of the oldest teams in the NHL to one of the youngest. There’s not a ton of time between preseason and meaningful games to figure things out. It is quite possible that the players are starting to get used to each other out there.

That said, it is one month into the season and that there is some really sticky NHL math going on. I think it’s awesome that the Sens are 4th in the East and the Bruins are 15th or whatever but I mean on that same note, as great as King Karlsson is playing right now he has more assists than Henrik Sedin, Edmonton is no.1 in the West and Alex Ovechkin is sitting in 29th place in scoring on TSN’s Stats page. To use the NHL “term du jour that isnt ‘compete level’” the sample size is too small. I expect the league will have a different look after the All Star break. Wasn’t Philly in the basement around this time two seasons ago when they made the cup finals?

Now that I’ve covered my buns, I have to admit, there are a lot of things that this team is doing that make me think that they won’t finish dead last in the East as so many predicted.

– Goaltenders doing their jobs but not being relied on to put on constant high fiving Jesus in space 50+ save performances.
– Special teams are really clicking (great for killing off the way too many penalties Ottawa’s taking right now)
– Team is scoring goals which they weren’t supposed to and, moreover, all of those expected to put up points are putting up points. Spezza, Michalek, Karlsson, Gonchar….these are the guys who are supposed to be on the score sheet consistently and so far they are fulfilling their role.
– New players delivering: Colin Greening Colin Greening Colin Greening Colin Greening oOOooOOOOoo also did anyone else catch Cowen dumping people on their asses left and right against NY?
– Rundblad gaining confidence with each game
– Kuba not playing like he’s wearing a used diaper full of Indian food and burnt hair (sorry Anchorman was on last night)
– Gonchar gaining confidence with each game
– I’m not noticing Phillips which means he is playing well.
– Neil playing out of his mind
– Multiple come from behind wins
– Winning games on back to back nights
– Bouncing back from tough losses
– Shootout wins.
– Bonus point: I dont think the Sens have lost with Winchester in the line up…

Alright, so this is a sunny evaluation but when a team wins 6 games in a row…what can I say, things look sunny. There are still some kinks to work out like having to play on their heels a man short way too often but…. I outlined all those things above as i feel there are a lot of positives so far and I just don’t see them all as flukes. Players will heat up and cool off but all those shot blocks in the first period last night? That’s straight up discipline.

If this team does well, great. I am totally at ease with not having a powerhouse team during a rebuild but if the team wants to roll let them roll. Look at how many first round picks the team picked up this past draft; that’s a bit of a buffer if the Sens are out of the lottery zone. I am almost completely sure the Sens wont “steal” last place from its rightful owner Columbus. If the team wants to start winning now, they start winning now. The Sens got an amazing draft pick this year at no. 6 but have made serious moves outside the lottery the past few seasons. Karlsson 15th, Cowen 9th, Rundblad (technically 17th  acquired by a 16th) Lehner 46th and a bunch of unsigned College boys. Not to mention former no. 6 Filatov aching to prove himself worthy of more than 5 mins of ice time. As I’ve said before, I want a Ryan Ted Nugent-Sir Anthony Hopkins too but if the team decides to start kicking ass then kick away. If things go south then we are who we thought we were and we get another high pick. As long as the hockey remains as entertaining as it has been I could go either way. I think yes, this is the whacky world of the NHL, of course it’s possible that the Sens make the playoffs. If they do I will see you and the Sensquatch in the back of the limo I just bought in cash from the Chinese mafia. If not I wont be mad at wherever they finish as long as they’re trying. Keep fit and have fun.