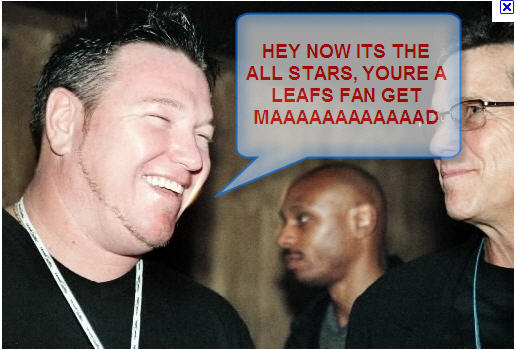 Okay now, settle down, settle down. Everyone form a semi-circle around this website and I’ll tell you a tale…a tale…OF A HOCKEY THINGS!

Don’t get TOO excited. It’s just a fairy tale. It can’t hurt you, it’s just filled with make believe things like gargoyles, henchmen, and James Reimer (7-4-4 / 3.00 / .900) in the all star game! I know. I know, those are almost BEYOND all star numbers but until scientists can invent a newer brighter better All Supernova Game lets each and every last one of us just take advantage of the magic we are beholden to. Granted he is the leafs goalie and I tend to be extra hard on them but you don’t see me objecting to Phillip Kessel or the unfortunately named Joffery (great job, parents) Loophole or Unfrozen Caveman Phaneuf being in the line up. They’ve had good and great (grood) seasons up to here, let the playaz play. What is unfortunate about this whole thing is that it is just a COINSIDENCE that a lot of the starting lineup for the all star game are actually enjoying exceptional seasons. The online voting system allows that there is always a very good chance the game can just as likely be the Teen Choice Awards rather than the All Stars up in here.
To me limiting the fans’ vote count to 30 has only made it a less annoying version of what Montreal fans did years ago when, thanks to some hacking, nearly the entire Eastern starting line up was made up of Habs. It was a great, great game for the always excellent and relevant Mike Komisarek and game MVP and MOST TALENTED GUY IN PRACTICE, Alex Kovalev. SNORRRRING. Note: Imagine how good Alex Kovalev would have been if every game was an all star game, practice or all star game practice? Admittedly, despite the new limitations imposed on fan voting it is a given that pretty much anything a fan base does is by default a less annoying version of Montreal.
Moving forward, to take off my rose, white, black and sparkly gold coloured glasses for a moment, I can admit that it will probably be very frustrating for fans of the actual all star game seeing 4 Ottawa Senators (obviously the most beloved team in the league ESPECIALLY in Ontario) taking spots in the starting lineup. Look, I want Alfie to start the game ALL THE LIVE LONG DAY, but I wonder from a player’s perspective if it takes away from making the game because there was an extensive campaign rallying fans to vote as many members of the home team as they can rather than making it in on merit …through a probably very political NHL brass based voting process alone*?
In a video I saw that there is absolutely no chance I am going to bother to link to (ITS CALLED TRUST, PEOPLE) Jason Spezza (40 points in 40 games) commented about how flattering it is that the good people of Ottawa have come together to support the home team but that he hopes he gets in on his performance as well. That pretty much sums up how I feel about this whole thing. I think it’s great that we fans have supported our best players, prevented Project Lamehem from being a success and given the host team some representatives but something still irks me about the process. Sens homer feelings aside, if had purchased a ticket to the all star game (which I did not/will not as it is WAY WAY WAY too rich for my blood) and the entire starting lineup was Ottawa Senators I don’t think I could help thinking “Wow, I just paid $250-$1000+ to see the Ottawa Senators play a pick up game against the westen all stars.” This is especially interesting considering the Senators skills competition was a couple weeks ago and tickets were 12 bucks. SPEAKING OF WATCHING THE SEANTORS PLAY HOCKEY THE SENATORS ARE SDFLK;djaer gjervjhaskdjfa aefpj 32023r TONIGHT!!!!!!

Game, you guys:
Thanks for sticking around none of you. It is Thursday and we find ourselves with a very non-Canada v. Finland bronze medal game on the docket. Our beloved Sens are looking great (NHL games are only counted in 3rd period performance now right? Great.) and are hoping to extend a three game wining streak tonight against The Tampa’s Bay Weather.Tampa had a little three game streak going themselves until they got shellacked byToronto the other night. So, there’s that. It’s a pretty big game for a pesky team looking to gain what little padding is available in the East and a very disappointing team looking to…not look disappointing.

Turris and Michalek
I have a good feeling that we could see a little something from either or both of these fellas tonight. Maybe Foligno is on the creep-creep a little too, given his penchant to bust into the zone this could be his kind of game. Turris and Michalek, like Foligno aren’t afraid to get in front and drive the net and I think that could prove very effective when the Sens penetrate the Lightning zone. Anyone like that new band Lightening Zone?

Shhhh quiet you’ll wake up Old Man Roloson!
As much as people seem to be complaining about Craig Anderson lately I must point out Dwayne Wayne Roloson he AIN’T. And no it’s not because he doesn’t have Rollie’s trade mark grade 7 on picture day hair. I like Roloson but man, if I’m a Tampa Bay fan watching a drying paint defensive system (full of offensive stars btw) and the 42 year old goalie is rocking a nearly 4.00 GAA and is 5.25 in his last 4 starts (all losses DOI OIOIOIOI) ….AAAAAAAND the backup is part time NHLer I MEAN STANLEY CUP WINNER Mathieu Garon….I would be mildly concerned. As an Ottawafan I think I can spot a shoddy goaltending tandem when I see one.
Back to Anderson, Im no Xerox Konopticon but I think that aside from the odd absolute blowout gameAnderson has been pretty damn good. Rebuild year good but good. I was warned about those blowout games he tends to have from a coupleColorado fans and have been glad they are less frequent than I was anticipating. To said Avs fans credit they also mentioned he tends to bounce back well from those games. Well played. Paul MacLean has been givingAnderson start after start and I, like WTYKY all star Varada, believe that increased stability in net has come from a coach that will actually give a guy a chance to get his game together with some consistent starts regardless of game outcomes. Cant say enough good things about Paulrus or Varada..rus.

1-3-Whatev
So, can we agree in the brother and sisterhood of friends that Hank Scorpio I mean Guy Boucher’s system hasn’t been the same since it was badassly exposed by Peter Laviolette and the Flyers on national TV? One thing I’ve really enjoyed about the Sens this year is that after a bit of adjustment early in the season, they seem pretty prepared to play against a team that traps up. Nothing has made me happier overall as a hockey fan since the lockout than the death rattle of the trap. Ahhh actual fun to watch hockey. Hopefully Boucher will continue to forget that his team has Stamkos,St. Louisand former impact player Lecavalier on it.

I don’t think Tampa will be a bunch of Roll Over Sallys or anything, they are a bit of a sleeper team and it will be a tight game but you have to like the Sens chances. With a pinky fingernail’s grip on 6th in the east it’s a bit of a must win if the boys want stay above the equator in the Eastern Conference. ENJOY THE GAME MY LITTLE ALL STARS!

*Full Disclosure: I happily participated in this voting process more than a few times. I got swept up to the point of writing in Robin Lehner. Discussion question: If the planets aligned and Robin Lehner ACTUALLY got voted into the all star game without even so much as having played a whole season (lets call it Reimer Style) would this be the best or WORST thing to happen to his development? Clearly it would be the best thing to happen to our ears sound bite wise.