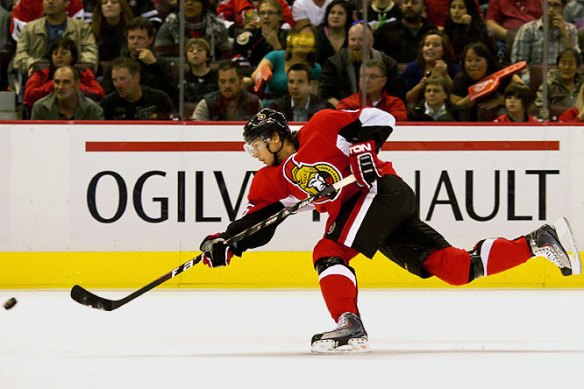 After Karlsson’s big four point Family Day game (for those outside of Ontario, we were bribed a couple of elections ago with the promise of an additional holiday in February, and we regret nothing) I turned to a friend of mine and asked, “So, do you think Karlsson is going to win the Norris this year?”

Having played his whole life, and with a brother who’s played in the AHL, ECHL, and elsewhere, this friend of mine is more literate in hockey than me. He’s able to read hockey in an intuitive way that I’ve never been able to muster. I’ll look at stats and profiles, trying to find some evidence of the fluid game I enjoy in the static numbers and standings; he simply looks at the gait or shot of a young player and has a more nuanced read of his potential.

He answered no immediately. “He doesn’t kill penalties.”

I’m open to the idea that Karlsson can’t win the Norris this season, but the difference between my friend and I is that I attribute that to some sort of institutional bias. Shea Weber should have won last year, but Lidstrom did, as if the gesture were required as the penultimate recognition of an all-time great before an impending retirement. (Meanwhile, Lidstrom looks like he can play for another couple of seasons…) The thinking seemed to go that Weber would have his day to win the Norris, and that when it happened—which is to say, this season—it would be seen as the passing of the torch from one great defenceman to the next.

And so I assumed that Weber would get his due, possibly at Karlsson’s expense, but that it wouldn’t be because of Karlsson. He leads defencemen in scoring by a country mile. He leads Shea Weber in CORSI. If it’s true that he has defensive liabilities as a result of his small frame, he far outweighs them (er…out-lights them?) with offensive contributions. He’s on the ice for more of his team’s goals than any other defenceman in the league.

But, as my friend pointed out again, “He doesn’t kill penalties. That might not be fair,” he said, “but that’s how the award gets voted. A defenceman who doesn’t kill penalties isn’t going to win the award for best defenceman.” I should point out that it’s true: Karlsson doesn’t really kill penalties. He’s on the ice for less than a minute of shorthanded time per game, one would assume right before the penalty is set to expire, while Weber leads the top penalty killing unit in Nashville with Ryan Suter. (Though, I suppose it’s worth mentioning, he’s not even in the top 30 in the league in shorthanded time on the ice, but that could have something to do with Nashville not getting as many penalties. Also worth mentioning is that with big Hal Gill traded to Nashville, Weber’s shorthanded time should take a dip. Gill is third in the league in shorthanded time on ice per 60 minutes. Final aside: Jared Cowen is 18th. Not bad for a kid.)

What we have is a philosophical question, and one that could have huge ramifications for a team gearing up to negotiate Karlsson’s next contract: is it more valuable to have a very, very good all-around player, or a player who is better than any other in the league in a few particular things? Because Karlsson isn’t just having a good season: offensively he’s dominating the league, and in a way that, at least this season, is putting him on another plane. The answer to that question is the difference between five and seven million dollars per year.

The closest correlative is supposed to be Mike Green, a similarly offensively gifted player who is supposedly defensively stunted. In 2009-2010 he led defencemen in scoring with 76 points. But the point here isn’t that Karlsson will score close to the same number of points, it’s the distance by which he’s outpacing the competition. In 09/10, Duncan Keith was only seven points behind Green (although he played seven more games). In 2008-2009 Green led defencemen as well, with Andrei Markov nine points behind him with ten more games played. The gap was large, though not large enough to see Green lose to Norris.

This season Karlsson is a whopping 17 points ahead of his next closest competition, Brian Campbell, is +14 to Campbell’s -9, and he’s doing it on a team most picked to finish bottom five in the league. He’s the team’s MVP, perhaps even responsible for their current playoff spot. If there’s a case to be made—and I think there is—it’s not only that Karlsson excels at one aspect of his position to a degree that no other player seems capable of matching, it’s the distance he’s put between himself and the rest of the pack. That he doesn’t play on the penalty kill on a team with Jared Cowen, Chris Phillips, Filip Kuba, Matt Carkner, Brian Lee, and other defencemen who seem better suited to it, seems like a strange reason to disqualify Karlsson from Norris consideration.

But it still nags at me a little: those other defencemen are better suited, and this friend of mine, like I said, didn’t even hesitate to say Karlsson wouldn’t win it, and not only because it’s ‘not his turn’ but because he doesn’t deserve it. It seems like what we have is a recurring debate, one about the traditional conception of the responsibility and role of a defenceman versus the staggering reality of Karlsson’s incredible season. And so Ottawa is faced with their first big debate about the value of a defenceman since they got the Redden / Chara choice so, so wrong.