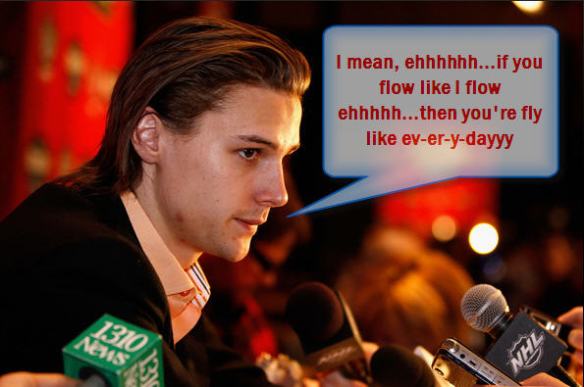 I didnt get to use this during the regular season. I mean, ehhhhh…Erik Karlsson is awesome and has little to do with this post.

And by “guys and laaaaaaaaaaaaadiiiiiiies” I mean everybody. What is going on with all the fussin’ and the fightin’ about pick/prospect/roster player trade packages and signing every FA coming up on the approaching market ALL THE LIVE LONG DAY? Puppies, puppies, I leave for <insertnumberofdayssincetheSenswereeliminated> days and this is what I come back (from jail) to? You well know I won’t have no fussin’ in this house so let’s settle it. Now, are we serious about this or do we just have the summertime blues because let’s face it, none of us can really get into how LA signed both Mike Richards AND took on Jeff Carter’s stupid, stupid contract and won the whole bleeping thing. Lets have a brief (overly long) boring chat about it…

Picture this, Sicily (Ottawa), the year, 19dickitty2 (2011) the Sicilian government (Bryan Murray and The Euge) decided to invoke austerity measures on the people of (I think I’ll stop this stupid, stupid joke now)…what I’m saying is, as we all know, back at the end of the 2010-2011 season several beloveds (Fi$her, Kelly, etc) and maligned turdlingers (Kovalev, Elliot, etc) alike were jettisoned in exchange for picks and Craig Anderson. A core of leaders were kept around to keep the new squadron of rookies and misfit toys in line.

Rebuild, retool, all you can eat breadsticks and pizzasalad, senate reform, whatever you call it, this was the plan for the foreseeable future. Buckle your blowout belts (?) and get ready for flushing your ticket money down the turlet. For a couple of years looked like we were in for watching the lowly Sens get beat badly by our boring cousins like the Buffalo Sabres on a Tuesday night…that or …just start getting into going to more 67s games for a bit :)Follow me? The Gentle Art of Lowered Expectations.

Fans were cool with it despite being informed constantly by the media that we weren’t. Was it really so surprising that fans might be okay with saying goodbye to the days of the Senators signing the hockey equivalent of mid career Nicolas Cage for way too much cap space? Oh sure, occasionally you get Oscar winning Leaving Las Vegas Nick Cage but most of the time you get Ghost Rider* Nicholas Kovalev…I mean Nicolas Cage.

The season rolled around and everything was going according to plan….except for one thing: The Sens weren’t getting blown out every night. Actually, many scenarios not named Bobby Butler were working out rather well. The team was scoring (top AND bottom six!), was well coached, rookies were holding their own for the most part, Anderson was doing his thing, stars were healthy, vets were having bounce back years and Erik Karlsson decided to become a nearly point per game defenseman! Long story somewhat less long, they made it into the playoffs and put up a good first round fight. Thhhhhheeeeeeee Eeeeeeeeeend…wait…no, now everyone is talking about how we should package any worth while picks or prospects for Rick Na$h or Zack Parisianakis, or Bobby Ryan OR WHO KNOWS WHAT SPICE!!

I think this brings us to an interesting crossroads. Do the Sens go the “Rundblad and a 2nd” route and expend some of their prospect wealth based purely on its raw potential in order to fill an organizational need in an awesome way? OR do they JUST WAIT AND ACTUALLY SEE IF ANY OF THESE GUYS ARE GOOD FOR FIVE SECONDS? ORRRRR …is anyone still reading at this point? I suppose I am looking at the screen right now so that counts, anyway…let us break this thing down a little…

Forwards:
As far as forwards go, I am for the latter. In my opinion, if there is a season for the Senators to augment organizational need with a big ticket FA, 2012-2013 Ain’t. It. Before cashing in a bunch of chips for a band new Bobby Ryan (or whoever just work with me) why not take it slow and see if we have a Bobby Ryan all our own in our system for ELC prices! I don’t think that it’s crazy considering the time the players currently have to develop and the quantity of promising young players in the system.

Against this type of thinking, a great example for the erring on the side of selling high while the selling might indeed be good would probably be Mark Stone. We nerds all know about the knocks on his skating ability but as of right now he is riding quite high on junior stats of just garish quantity, a very strong world junior campaign AND a gorgeous assist to Jason Spezza in his first NHL game WHICH WAS A PLAYOFF GAME. I see that if Stone cant translate his game to the NHL level that now would be the time to put him in a package to a team that might be tantalized by his accomplishments in exchange for a proven NHLer. Or if want to be like me (blech!) you can think about it this way: You know who else had the numbers and the junior accolades but was told he didn’t have the skating for the big leagues? Luc Robataille. Drafted in the 9th round after putting up 191 points in 63 games for the Hull Olympiques (WTFBTW). It comes down to, does Murray want to, admittedly, take a big gamble by holding on to him to see if a kid who has tons of potential works out OR does he think he has a Corey Locke on his hands and must make an executive decision right now to package him for Raffi Torres or Raffi Torres equivilant while he still can. With Milan Michalek and Jason Spezza under contract for the next few years I think it’s a better idea to potentially stink and find out if Mark Stone or (deep breath)…
Mika Zibanejad
Jakob Silvferberg
Stefan Noesen
Matt Puempel
Andre Petersson
Stephane DaCosta
Mike Hoffman
Shane Prince
Jean Gabriel Pageau
Jakub Culek
Or someone else out there in the weeds we haven’t even given much thought might be able to make the leap and work out as a high quality NHL star. Crazier shit has happened. Right, Sideshow Daniel Alfredsson?

I know some of you might be thinking some of the names on that list are a stretch. History indicates that, yes, most of those guys might not get more than a cup of coffee OR WHO KNOWS WHAT METAPHORICAL DRINK in the NHL. To beat a dead horse, ask Corey “One NHL assist since being drafted almost 10 years ago” Locke how that do.

What I’m saying is, coming off an albeit weirdly successful rebuild year that featured mature rookie and 7th round pick Colin Greening on the first line for the majority of the season, I think we could stand to go for some psychedelic line combos with a couple of our li’l stars and not some overpriced FA that, yes, would have fewer growing pains. For me, the smart strategy is to properly manage the absolute wealth of young CHEAP prospects at forward, see what works out and use the team’s cap space to pay some chugalug to fill other gaps that can’t be filled internally (defense).

HEYYYYYYYYYY Defense:
Following me so far? Great. Now, for a hypocriticalish turn on the question of defense. It looks like the Sens will lose both Phyllis Cuba and Matt Gilroy in the coming off season. Derp deeee derp dee deerrrp. Filip Kuba had a great bounce back season. Especially great if you don’t count the playoffs (note: They count!). True Kuba’s 20+ minutes a night and high plus rating won’t easily be replaced but we ARE still talking about replacing Filip Kuba here. Don’t even get me started on Matt Gilroy.

Sidenote: I’m thinking that Brian Lee must have been really upset with where his career was going and asked for a mercy trade. I thought he was playing quite well. He came into being the well rounded, mid minutes guy the team needed then poof out of town. In his place we got an offense based guy who couldn’t finish. So we got the old Brian Lee. Sweet trade off. We’ll miss you newer, better Brian Lee. Enjoy your new home and wear lots of sunscreen.

Right, so, I’m just going to put it out there and say the Sens are definitely resigning Matt Carkner; book it. If management were to bump him up by half a million dollars from his current salary, he will make as much as Bobby Benchwarmer. I’m not even counting him as a question mark.

No doubt the prospect pool is quite thin on the blue line at the moment. I know my proposed wait and see strategy for forwards would cause Craig Anderson to have a nervous breakdown if applied to the D squad. People really have their doubts about Borowiecki or Wiercioch  making the jump but I don’t think its that nuts to try one or split time among both of these guys in a protected role in place of Gilroy. Borocop had a great year down in bingo (made the AHL all star team as a shutdown defenseman? Pretty cool.) and Wiercioch has put up one less point as a Sen than Gilroy did (and in almost half the games to boot!). I’m saying, c’mere and check this out…also, you wanna buy some speakers?

Of note: While typing this up I ACTUALLY FORGOT SERGEI GONCHAR PLAYED FOR OTTAWA. So, you can build three pairings with one FA signing or don’t sign anyone and give one or both of Borocop / Wiercop (?) a chance

Also of note: The names Borowiecki and Wiercioch are really annoying to type.

Yeah it wouldn’t be an all-world defense but in a rebuild I’d be fine with this. Our D kiiiiiind of stunk last year and really it’s just replacing Filip Kuba without giving up any picks or prospects. Maybe Murray would have to overpay for an FA but I’d be okay with that with the cap space Ottawa has. I do feel a bit lenient that if Murray could hit a homerun and snag Suter or Webber *hand wanking motion* sure give some stuff up but I say keep drafting D…it’s a rebuild people.

Goaltending:
I’ll keep this one uncharacteristically brief. The Ottawa Senators have 3 awesome, exciting goalies in the system, 3. 3. Has that ever happened in franchise history? Don’t give that away.

*Full disclosure I’ve never actually seen Ghost Rider:The Movie. I was turned away at the door for being too old to get in (see what I did there?). I did see the trailer which was like drinking a glass of boiling hot toilet water. I heard the sequel is actually much better (not joking I really have heard that**).

**Still not my cup of toilet water though

8 thoughts on “Hey, Ever Wonder What I Have to Say About Ottawa’s Prospects vs. The FA Market? WAIT, WAIT, COME BACK!!”