One tragic byproduct of this whole lockout—other than people losing their jobs and stuff—is that our web sphere (that’s a thing) has lost some serious momentum. James is killing it over on Twitter as usual (just over –>), but I don’t have anything to write about except some whiny articles about how I don’t like hockey anymore and how billionaires have billions of aires. I miss being enthusiastic, childlike, idiotic about unimportant entertainment.

So, as a new ongoing feature, I’d like to write about Star Trek: The Next Generation, which was just added to Canadian Netflix, as I watch all 177 episodes in order.

Now, for our American readers, you need to know first that Netflix in Canada stinks. It doesn’t have anything. While in Amurh-ica you have access to hours of quality programming (read: Golden Girls), in Canada Netflix is mostly state-sponsored shows about the joys and mishaps of agricultural life and also some SeaQuest 2032 (R.I.P. Jonanthan Brandis, King of Tiger Beat). For some reason, content rights have to be negotiated fiefdom-by-fiefdom. But Star Trek TNG was just added, and though I shudder (with pleasure) when I see the words “177 episodes” displayed, I only watched the first four episodes this week.

Episode One: Encounter at Far Point

The new series starts out ballsy by following the statement “To boldly go where no one has gone before” with an episode that basically asks “is all this exploring stuff even a good thing to be doing?” Within a few minutes of taking over the ship, Picard and company are confronted by Q, a near-omnipotent creature who appears in the guise of the various phases of human expansion and colonialism. Q then proceeds to put them on trial for the crimes of humanity. You could have ended the entire series right here, with Picard admitting that exploring for exploring’s sake is sort of dangerous and meddling and stupid, that the human race is a virus, and then the screen could go black and giant middle finger could appear. This might be the series’ most meta, first-year-lit student moment. It’s either awesome or stupid, depending on how you look at it.

We also get to see a version of Picard that is irresponsible and dickish. He hates children; he risks an emergency saucer separation at warp 9.8; he makes Riker re-dock the ship manually for no reason; and he’s kind of brattish when standing up to Q, causing the god-like being to repeatedly injure his crew. Kind of awesome, again, for the debut episode to be like, “You want more Kirk? Guess what: Captain Kirk was an asshole. He lost a crew member every single episode. He was a terrible captain.” Then they find a planet where a human is mercilessly abusing a giant space jelly fish, basically admitting that humanity isn’t that much better in the future than it is now.

Oh, also: Shit is dark. Someone actually gets shot with a machine gun in this episode. I think this might be the darkest episode until the one where Tasha Yar has to fight someone with a spikey glove in a cage of death. You know the one. I think it’s an episode or two from now.

Counselor Troi is clearly intended to be this show’s Jonathan Brandis. 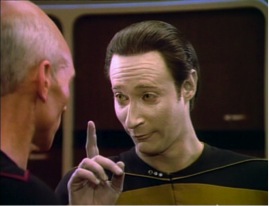 Okay, this is incredible: in only their SECOND EVER EPISODE a space virus makes everyone act drunk and screw each other. That’s not an exaggeration. The Enterprise stumbles across a ship where the crew immediately demands HOT MEN and then proceeds to blow themselves out of an airlock. I’ve been drunk before, even stupidly so, but I’ve raaaaaaarely wanted to kill myself and everyone around me because of it. I can’t speak for my friend Tom, Who Lights Camp Fires with Gasoline. He might be space virus drunk. Also, someone showers in their clothes. That’s just crazy.

There’s a weirdly puritanical subtext to this whole thing, sort of like Reefer Madness. Do you want to get drunk kids? Just know that if you do, you might kill everyone.

So, the Enterprise crew, including, somehow, Data, get infected with this thing, and everybody, including Data but excepting Jordie (Geordie?), gets laid. Wesley Crusher, being a boy, has no interest in being laid, but uses his boy genius to steal the ship. A meteorite is hurtling towards the ship (the odds of a relatively small rock in space arcing toward a relatively small ship, thermodynamically speaking, are astronomically tiny, but whatevs) and Riker, having less than a minute to live, decides to narrate something in his space journal about the situation. Also, the most advanced ship in the history of the race stops working if you take out a bunch of giant microchips. 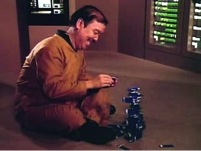 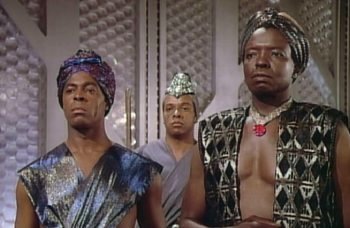 Otherwise known as the most racist episode of Star Trek TNG ever, the crew visits a planet of Africans and makes a series of condescending remarks about how they, the largely white crew, used to be just like them, the Africans. Meaning materialistic, venal, and sexist. Surprisingly, Worf–from the race of Klingons that usually stand in for anachronistic and vaguely ethnic stereotypes–doesn’t even get a line to speak. Seems to reaffirm that you only need as many Others as you need antagonists for your space operas. Anyway, Tasha Yar fights another woman to the death in a laser cage, and everyone moves on to other, hopefully less racist episodes.

We also discover why Star Trek TNG took so long to get to Canadian Netflix: at one point Data calls French an outdated language. Racists AND monologuist. Not exactly the franchise’s brightest moment.

Ferengis (sp?) shut down the Enterprise, making them totally vulnerable. Picard uses the opportunity to tell Data about the history of human flags. The bad guys stole a T-9 Energy Converter from Gamma Tari 4. This is relevant.

For the rest of the episode everyone is pretty much useless at their jobs and the ship barely works. Picard seems completely insane, and Riker looks at him like he knows it. Data gets his fingers stuck. The future is a terrible place full of imbeciles.