After Sunday’s game I actually found myself thinking back to some low times as a fan, oddly enough. You know what I’m talkin’ about… back to the days of Heatley’s ugly and drawn out exit, Clouston as ice king, many fans down on Spezza and hoping people like Alexandre Picard would ‘find their game.’ Worst of all Ottawa was still wearing that black SNES jersey.
We fans had enjoyed some very strong years in the early to mid 2000s but back just a couple of years ago it was really sinking in for me that the Senators were making a strong shift into shittiness.

Oh sure, I was still supporting the team and still making it out to what were some pretty painful games. The worst of which was a 5-1 pounding at the hands of the Florida Panthers on a Tuesday night in their black jerseys. MONEY AND TIME WELL SPENT! I mean, I’m a pretty optimistic fan overall but by all indications it seemed that we were in for a very steep and very, very long decline from the President’s Trophy days.
I wont dwell on it too long as I recognize it’s easy to wax on all flowery when your team just won a huge playoff game but thinking back to how recent many of those unpleasant events were I have to say I am feeling very grateful that despite a couple of Pascal LeClaire shaped bumps and thanks maybe to a few bits of good fortune like your talented but spotty diminutive mid-first round pick blossoming into the best defenseman in the game…I have to hand it to Bryan Murray and co. They made this team very fun to watch again…and FAST. I often think “What must it be like as an Oiler’s fan.” All those young fire crackers collected over years and then at the end of another brutal season your reward is, well, time for another high draft pick. That year that “earned” Ottawa Mika Zibanejad at sixth overall was hard enough. The Sens brass have built a team so solid that a squad comprised of half of the farm team is still a post season contender. And all without ever having to come in worse than 25th.  Cant really call it a fluke anymore when MacLean actually got a better result with less. Anyway, speaking of Zibanejad, let’s get into it…

Obviously Pageau was the story of game 3 and we will get to him hey IM NOT MADE OF TALKING ABOUT STUFF EVERYONE’S TALKED ABOUT ALREADY!!! I want to point out that Zibanejad is now getting 20 minutes of ice time and he’s earning it. It would seem Mikachu has earned increased trust form his coaches and as such essentially doubled his ice time. I notice Zibanejad every game and even if he’s not getting the goals he is certainly attracting attention. Montreal appears to have a very tough time answering to Zibanejad’s size and strength. I love watching the Swedranian Bull routinely shrug defenders off his back Mario Lemieux style and work to get the puck to Silfverberg (whom he shares beautiful chemistry with).
It isn’t as if Zibanejad has been a slouch out there with 2 assists in 3 games. That’s not bad at all for a rookie but goals are what puts the pee-pee in fans pants (just…terrible writing here today). No question there will be a lot of focus on the diminutive JGP tonight (Note to JGP: Be careful out there buddy, this team is immune to disciplinary action! ITS A GREAT LEAGUE!). Anyway, if there is a lot of pressure to shut down Pageau I hope that opens things up a bit for Zibanejad as I am confident he can get something done. Big game for him I think.

You got me feelin’ Pageautions
Okay here we go. Judging by the way he was playing during his initial call up I just had a feeling this kid was ready to explode out there. I mean sure it’s still very early and I believe it was Winfrey Churchills who said, “Those who fail to learn from the Regins of the past will Bobby Butler in the future.” But you know what? Sometimes unexpected rookie sensations DO actually work out. We cant always be sad-sack realists.  It’s fun to be excited! PAGEAU UNTIL FURTHER NOTICE™! Regardless of what happens tonight or in this series no one will ever be able to take that game away from Pageau or the ever growing history of the franchise. Most dominant franchise win in the playoffs, a 5-0 line brawl, a rookie hat trick and of course, the “PAGEAU, PAGEAU, PAGEAU” chant (in my opinion one of the coolest things I’ve ever seen happen at SBP). Pageau was a key in a night where I felt we saw the entire franchise move closer to a new chapter.

Can you believe Ottawa was out shot last game?
Despite all the story lines floating around out there I think this game is about goaltending yet again. Anderson is going to have to be very, very good again as my inkling is that Montreal is going to employ a strategy of going hard to the front of the net and trying to bang home rebounds. The Canadiens have made it no secret that they think that Andy is a “first save” goalie and if you can get a rebound off of him and on your stick you can put it behind him. It will be up to Andy to stop those pucks from rebounding but also up to the large lads in front of him to make sure they cant get in too close, particularly the sneaky Gallagher (who’s comedy is terrible) and Subban who likes to jump up in the rush (and on his hits). No telling which Carey Price we will see. Your guess is as good as mine.

Despite how satisfying that game was for we Sens fans lest we forget that one game before Ottawa was positively dominated. The complete 180 that they made between games 2 and 3 has me as excited as I am nervous about tonight. In fact, Ottawa has only looked particularly good in 1 of 3 games thus far. That’s not to say that game 3 wasn’t a turning point but if we tune in tonight to see Ottawa with their foot off the accelerator we could have a tied series again and a much different scenario on our hands. The good news is the game they did look good in was a particularly inspired performance, the kind you can build momentum around. Ottawa’s going to have to come out as hard as they did on Sunday, no question.  Keep it simple stupids. Hit, skate and score. 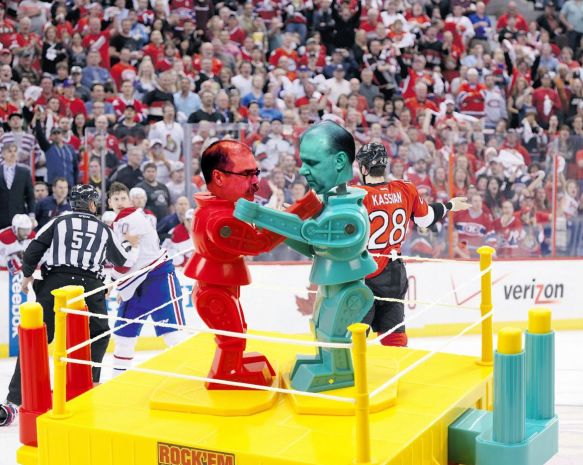 More gold from Steven! Enjoy the game everybody!