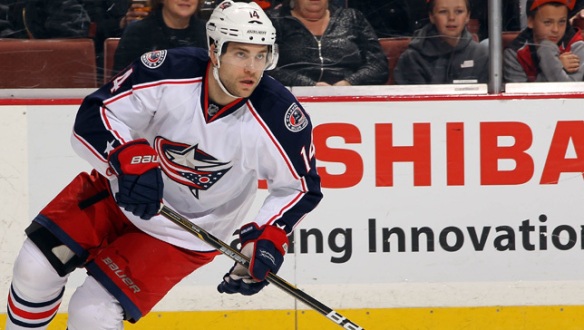 Last season, I made a bit of a stink over letting Filip Kuba walk. I’m not a huge fan of Kuba, and didn’t think for a moment that Ottawa should have matched the two year, $8MM contract Kuba eventually received from Florida. But his exit raised larger questions about consistency and reliability on the Ottawa blueline. Guys who can play 20 minutes a night don’t come along every day, and Kuba, while not flashy, was something of a proven commodity. We knew he complemented Karlsson well enough. It made sense to me to try and re-sign him.

Thankfully, the acquisition of Marc Methot made the debate a bit of a moot point. Methot not only stepped into Kuba’s shoes, he played tough minutes, and quite well, with and without Karlsson. Thank god that worked out, because Ottawa gave up a good young top six forward in Foligno to get Methot. Also thank god the loss of Kuba was further mitigated when Sergei Gonchar ate up minutes and carried the offensive torch for Karlsson while he recovered from a severed achilles tendon.

But Ottawa has entered another off-season allowing another veteran to walk to a team who opted to give out another expensive two year deal. Murray has to wonder where the cavalry is coming from this time. It’s those depth, second line guys who populate your system, and allow coaches to give their elite players space.

Karlsson will still play 30 minutes a night, if healthy. (Or even if he isn’t, as it’s suspected he was still recovering in the playoffs. It certainly looked like it at times.) But unless Murray turns to the free agent market, or gives up another prime asset in a trade, it seems like he’ll be leaning on Patrick Wiercioch to develop.

On the surface, Wiercioch had a strong season last year. 19 points and 5 goals in 42 games officially qualifies you as an offensive defenseman in my books. But this chart (which I saw in this Score blog post about Dion Phaneuf) caught my eye: 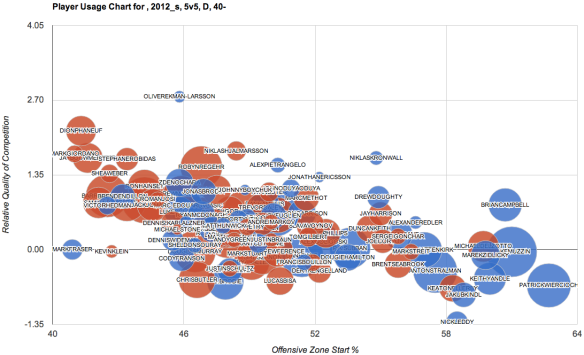 This is 5v5 usage for defensemen over 40 games this season, and check out that big blue dot in the lower right hand corner. Wiercioch received more offensive zone starts, and against weaker competition, than almost every other defenseman in the entire league. He was effective in that position (as evidenced by the size of that blue dot–he drove possession in that role), but what this chart demonstrates is that he isn’t going to be the kind of minute-eating, all-around guy that Gonchar and Kuba were. He’s a weapon to be used extremely selectively. It’s also why, despite his numbers, Wiercioch found himself scratched at times for players like Eric Gryba. Gryba won’t get you the points, but you can lean on him when the game suddenly shifts and you find yourself pinned in your own end.

The point being that while Wiercioch is good at what he does, and you want that kind of player at your disposal (it’s why Anton Babchuck keeps finding work), it’s not likely that in one season he’ll morph into the kind of defenseman Ottawa needs–a reliable second pairing player who is responsible defensively, can play quality minutes, and can also drive possession.

The solution might be a full season of Jared Cowen, though he lost a year of development and looked lost against Pittsburgh. (Not to draw conclusions from that about Cowen; the Pens are a good team.) But a quick glance at the UFA market for offensive defencemen shows it’s better than I thought.

There are higher profile guys like Tomas Kaberle, Ryan Whitney, or Ian White available, but none of them have had particularly good seasons of late, are clearly in decline, and will cost. A guy like Zidlicky or Scuderi can put up minutes, but will cost you a pretty penny. (Or 400 million pennies a year.) Which brings us to Grant Clitsome.

Clitsom put up decent numbers and possession metrics on a weak Winnipeg team playing about 16 minutes a night last season. He was on pace for about a 8-24-32 stat line if it had been a full season, which would have been a career high by far, and he was a +10 on a team that was bottom five in goals against. His shooting percentage (7.1%) wasn’t particularly out of line with his career average (6.5%).  And he was affordable, playing out a two year, $2.5MM contract. At 28, he has a year or two left of prime output if you assume defensemen develop on a longer timeline than forwards.

Even if some regression is to be expected (it was a contract year), Clitsome is the kind of player I think Murray is hoping Wiercioch will develop into–a player who can put up points and play in both ends of the rink. If you only look at offensive zone starts, though, where Clitsome had a 49.4% to Wiercioch’s 62.7%, Patty has a long way to go.

Next season is going to be interesting. Improving on making the playoffs and winning a round by hoping Karlsson will continue to be a wizard and injured players will stay healthy seems naive. Hoping that the addition of another scoring winger will be enough, especially if we lose Alfredsson, also seems naive. It’s going to be those hidden gems that allow the Senators to keep taking the rest of the league by surprise.