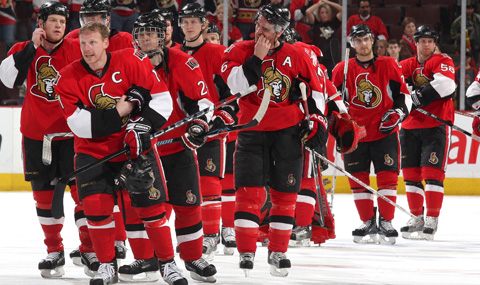 There’s been a lot of talk of last Friday being one of the most transformative in franchise history. While it’s definitely, say, top five, I don’t know if it’s up there with the launch of the rebuild; with letting Chara walk; with running the jewels AKA trading Yashin for everything in the Islanders’ cupboard; or with trading Hossa for Heatley. Ottawa lost two top six forwards and gained two top six forwards. Before we assess whether or not Friday was a game changer, we should ask if Ottawa is actually a changed team, and if they’re any better.

Here are a couple of assumptions:

On the face of it, the answer to the question of whether the Sens are a better team seems to be yes and no. Alfie’s intangible factors don’t lend themselves to quantification and measurement. Leadership, connection to the community, “being clutch” (if that’s actually a thing and not just creating enough positive memories over many seasons in one market to be thought of fondly in that market) may or may not actually win you hockey games. However, when looking purely at the on-ice skills Alfredsson brought, the unpopular conclusion has to be that he’s actually a replaceable player. Not easily replaceable—he’s an experienced two-way forward who played in all situations and drove possession—but it’s possible. And, when we look at what MacArthur brings, Murray’s done it.

Looking purely at possession stats via behindthenet, Ottawa is pretty clearly better off. Relying primarily at QoC and Corsi Relative, Mac faced stiff competition and tilted the ice in the right direction, though he played two minutes less a night than Alfredsson on average. His shooting percentage has remained near 14% his whole career, too, implying reliability; he isn’t due for a sudden dip. As a one-to-one comparison, and with Alfie’s intangibles removed, MacArthur has better statistics, is younger, and is cheaper. Without being in the dressing room and not knowing how the rest of the team’s performance is affected by the leadership void (again: if that’s a thing), if we’re being unsentimental about all this, then I think it’s very fair to say that Clarke MacArthur is at least a serviceable replacement for Alfredsson as a second line winger.

(As an aside: what Toronto is thinking in paying Clarkson $5.25MM for seven over paying MacArthur $3.25MM for two, I’ll never know. But given the community’s reaction, nobody really knows.)

Ryan, as you might expect, received some favorable matchups in a bid to create offense—but not nearly as favorable as Silfverberg received in his freshman season. Silfverberg is really the X factor in all of this, given that he’s so young and could, any season now, take a step beyond the perimeter shooter that he was in 2012-2013. He shot the puck more than anyone on the Senators not named Karlsson (aside #2: Karlsson is fucking amazing), but had long stretches of ineffectiveness where MacLean kept him on the top line anyway, perhaps for lack of options. Without Silfverberg stepping forward, Ryan is pretty clearly an upgrade in every conceivable category except salary.

And speaking of salary, Ottawa does end up spending about $2MM more of it, though the possession boost between Ryan and Silfverberg is very significant. If you treat the MacArthur / Alfredsson swap as a wash (Mac is younger, cheaper, and has better statistics, but doesn’t have the intangibles), Ottawa pays a little bit more, easily upgrades on Silfverberg’s 19 points in 48 games last season, and is still spending less on salary that almost every other team in the league. My nutshell conclusion here is that, at this point in time, Bobby Ryan and Clarke MacArthur at $8.35MM is better than Jakob Silfverberg and Daniel Alfredsson at $6.4MM. Obviously this changes as Silfv develops, Noesen becomes an NHLer, and Anaheim uses that first round pick. But that’s the snapshot.

Of the other X factors here, I think the biggest is whether Ottawa will use the (relative) cap savings of having these two cheaper scorers to go out and spend on another veteran player and silence the intangibles crowd. There are some enticing names still out there, and Ottawa could still leave the free agency period up a forward instead of swapping out two for two. If we’re really concerned about what ephemeral leadership qualities we lost when Alfredsson and Gonchar walked out the door, then Murray could always throw some money at Brenden Morrow. Won’t Jagr play for anyone who pays him? Hey, even Milan Hejduk is available–he won a cup, right?

6 thoughts on “Okay, so our hearts were torn out. But is our favorite hockey team actually better?”