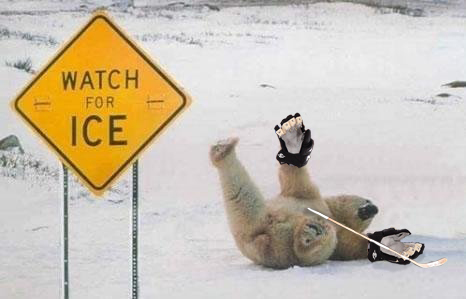 That Bear slipped in some butterscotch…or no wait I guess it slipped on some ice…not as funny but you come to this website for the straight facts and that’s what we’re going to give you…anyway, what am I talking about oh right, hockey sports!

Well, first off, thank The Creationistor that there was a three day layoff in between a humiliating loss to the Flyers and tonight’s tilt against the Bruins. That way we each and every last one of us had time to come together in the brother and sisterhood of friends and freak the fuck out over everything to do with the team. It has been, to quote Satan His/Herself, “A whirl of wind.”
Is it just me or has the vibe surrounding this season been AMC’s The Killing Season 2 level dark? As a person who follows hockey as an escape from the day in day out ratking eat ratking daily flogging where you just wish Flanders was dead this has been a less than fun opening quarter. Things were looking up, Ottawa hadn’t actually had a regulation loss yet in the month of November then one blowout loss (that was admittedly a complete chore to watch) and…
– Spezza is a failure.
– Anderson is garbage.
– Let’s hold something Jared Cowen cares about for ranson until he plays better
– Coaching is all wrong.
– Team needs to make an emergency trade.
– No one goes to games.
– It places the lotion into the basket

Maybe this is my shit. Maybe it’s all me and I just (definitely) spend too much time on Twitter. Look baby I can change my garbagy ways (I totally cannot by the way so ladies/human beings, form a line).
That loss was awful. This season isn’t going quite according to plan and maybe it’s the Alfie departure talking but do things really seem THAT fucked? Where people are calling for the Jack Adams winning coach’s head?
Spezza’s possession numbers are very very bad but lucky the fans who’s struggling captain has 16 points in 17 games while he figures his shit out! I mean think about it. Philadelphia captain Claude Giroux scored just his first goal OF THE SEASON less than a week ago. And he’s getting paid more than Spezza and is signed until the year 2058. Could we even stomach something like that? Not to make excuses…actually whatever, making excuses a little bit, I think Spezza is playing hurt. As an die hard Ottawa Senators fan, I feel I have a lot of experience watching him play hurt. A groin injury is one of those annoyingly perfect injuries to frustrate everyone. You can stretch it out enough between games that you are fit enough to play…but you probably shouldnt cuz that thing is going to mess your game up two shifts in and as we all know a Spezza who must cut corners is the most annoying Spezza of all. I kind of just wish he’d sit a couple and not be a hero. Turris is already holding it DI-DOWN as top centre…take a load off. Let someone else turn the puck over for a few games and get well soon!
Here’s what I’m saying, Ottawa just played probably it’s worst game of the season, but honestly, the team is not an unmitigated disaster.
Here’s some good:
– They are producing quite well offensively
– They have a 2nd line that is clicking to the point that they are now the 1st line
– They have one of the better penalty kills in the league (handy for all the penalties they take!)
– They are getting .900+ goaltending from both goalies (one of whom has been straight up outstanding..it’s a secret which one it is!)
– Karlsson’s career did not end praise be to The Lion of Judah for He makes all things possible. He’s looking faster and faster each game. The more he heals the more he can break open games.
– Despite struggling mightily out of the gate the team is still sitting at .500
Here’s what’s bad:
– Despite uncharacteristically good goal production I am not kidding the power play looks like a goddamn penalty kill most of the time. I’m no Rt. Hon. William Lyon Mackenzie Hockeycoachingskillz but that is ri-goddamn-diculous.
– The defense has been killing this team’s chances a lot of nights.
– Oy with these LINE COMBINATIONS can we not give guys more than a shift to try and gel?
– The team is .500 and they are better than that.

In short, the defense as a unit, an inept power play and a lack of chemistry have been what’s ailing the team. This is not unfixable. Hey I’m confused too. This was a defensively strong team less than a year ago and now its a defensively weak team. Part of me thinks the drop off is because this is actually NOT the team we saw last year and it is still learning to play together. I’m not ready to pack it in. Look at the standings. There are teams that are for REAL-real at the “fire the entire coaching staff, fire the GM, oh uh we are Infinity years deep into our rebuild and we are still in last so I know let’s look at trading a player that we just tanked an entire season to pick 1st overall LESS THAN 17 MONTHS AGO” level of fucked. Ottawa is not that. They got their asses deservedly kicked because they put up an uninspired effort…That was a full team loss and there’s no specific person to blame nor is there one miracle move Bryan Murray could make to cure that.
James?
Yes, dear?
Could you shut the Christ up and move on?
Sounds great!

HEYYYYY Michael Zibanderhands is on the fourth line b/c “<insert literally any word here> probs”
I actually quite like Derek Grant. He’s been a quietly solid player for Ottawa and a  valuable penalty killer. Matt Kassian is a human man who is paid to occasionally play the coolest sport on wheels, NHL hockey(.com)…Hmmmm, we have a goon and penalty killing call up…you know what this line could use? A sixth overall pick who has put up good numbers this season. This preview has been all about venting THANKS FOR READING! I honest to God I hope this line gets one shift and that Spezza gets to play with Zibanejad for I don’t know, how abouuuut MORE THAN 5 MINUTES? Like I said earlier I think Spezza’s in rough shape right now and if you’re not going to break ups the 16-7-9 line *wipes forehead in relief* can you at least give him the big, strong, fast guy with a great shot who’s actually scored some goals this year? Asking for a ghost. Maybe this punishment stuff will work on him? Like when he was returned from Bingo and put up points immediately. And it is punnishment, let’s not pretend having to play with Kassian while trying to work your way back into the top six isn’t.

Craig Anderson is getting the start.
I see what MacLean is doing here. He doesn’t want to break Anderson’s brain after what happened on Tuesday. I’m not saying I’m into it…I get it. Weird after Lehner got nearly every game against Boston last season. But the coach feels the need to through him to into the Bear filled pool rather than give him the Sunday game against Columbus. Let’s hope the Bruins don’t know about wrap arounds! Don’t worry they wont try that, that would be way too interesting to watch and interesting ain’t Beantown’s game.
No word on who Boston is starting. Chad Johnson (broiest name ever?) was in net last night for the Brewins so that might mean that we see Ttuukkaa Rraasskk tonight…which doesn’t really matter seeing as Claude Julien makes his whole frigging team play like the goalie anyway.
Boston is just the perfect team for Ottawa to play coming off of a game where they were shut out (SARCASM!). On a more positive note if they can beat Boston that would probably be their biggest victory since their win over Detroit back in what feels like the early 1700’s now.