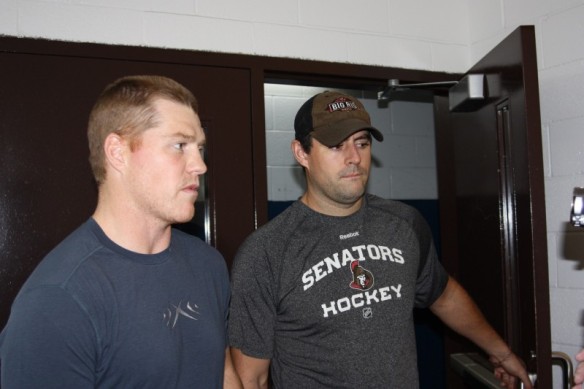 As a creep [See: above line], I’ve been going about my business creeping on message boards and twitter and in my travels I keep coming across something I’d like to discuss with you up in that tree fort over there.

Recent injuries to veteran Christophers Neil and Phillips have seen their newly minted Assistant Captain duties assigned to other deserving players in the line up. We’ve seen the “A” affixed to the uniforms of Marc Methot, Kyle Turris and delightful wood sprite Erik Karlsson over the course of the season. You know what? The letter has looked good on each of them.

Since these fine young lads have taken so well to the letter, I have encountered a number of fans speculating who will take over the role of assistant captain next year. Particularly with regard to Phillips whom many think is on his way out. Your father and I have become very concerned that you’re going to be hurt by this.

I’m afraid you’re setting yourself up to be among the many people who will be disappointed when Chris Phillips is re-signed for maybe two more years after this season. Make no mistake here, I’m definitely not saying that I want that, I wish the team would get real-real with him and say, “Thanks for your years of dedication but the organization has decided to move on.”
I am personally of the opinion that Eric Gryba, who is the lowest paid player on the team by the way…YES he makes less than Matt Kassian, could handily take over Big Rig’s role on the team. It’s not going to happen though. Gryba wouldn’t be included in proposed trades if he was a lock for a future spot on the team.
Let’s look at the cold hard facts: Phillips has 1100+ games / 100+ playoff appearances in an Ottawa uniform, wears an A and owns a goddamn RESTOBAR in town. That’s not even touching the PR mess that was the organization letting their beloved captain walk a little over 6 months ago.
Murray is desperate to buy und Phillips is desperate to sell. They’re the original odd couple! Phillips is so entrenched here, I think he’d even take like $900K to stick around if he has to. HE EVEN HAS A SUPPLEMENTAL INCOME! I’ll be interested to see how that plays out as both sides appear to have leverage.

The other misconception with #4 is that because he LOOKS old that there’s an assumption that he is retiring soon. A lot of people seem to be under the impression that it will be at the end of this season. I’m going to knock your socks off here, dude is but 35 years of age. Perspective: Rap-rocker Joe Corvo is 36! My feeling is that despite Philly’s advancing age and declining play, he is not yet old enough or bad enough that the he wont be kept on in his current mentor role and for a minute.

“But what of the trade deadline,” ye might ask, “on an expiring deal wouldn’t he be the perfect veteran pick up for a contender?”
No! That ship has totally sailed. If Ottawa were going to get a return on Phillips it would have had to have been during Yon Great Fire Sale of 2011. Instead they inked him to an EVEN AT THAT TIME overly long, overly generous 3 year/$3.5MM per year deal.
As for suitors, I can’t really think of a team that would consider themselves a contender who would be looking for a bottom pairing D man who’s been so-so this season for their playoff run. Sure he’s been to a Final but that was 7 years ago now…also on a team that didn’t win. Remember how Murray could barely give away Alex Kovalev? That guy had over 1000 points, numerous all star appearances, 2 Olympic medals and a cup ring! I simply cannot see the team giving away one of their assistant captains for a conditional seventh round pick.
Anyway, as Gryba shows, those bottom pairing type players are guys teams tend to already have kicking around. A buying team would have to be one with serious injury concerns looking to pick Phillips up as depth. Plus I generally think they straight up wont shop him Oh, PLUS+PLUS Phillips has a limited no trade clause. Murray gave him a pretty nutso deal last time around (3rd highest paid D man!) I can totally see him getting TWO more years. It would be a one year deal that would be the surprise for me.

As for Neil, the conversation is a much shorter one: Bro is a fourth liner who makes nearly $2MM until 2016. The Sharks apparently wanted him in 2011, instead Ottawa locked him up until he turns 37. Don’t see Neiler as movable now or at least until the 2016 trade deadline and who knows what his game will look like then.

Anyway, maybe you’re fine with all this. I’ve made peace with it and if you haven’t, well, I’m not trying to bum you out or whatever just trying to brace you for what I think is to come. If it were up to me, this is an area where I wish the organization would pass the torch a little bit. They made a good step with the Spezza captaincy and, yes, my picks would be Karlsson and Turris for the A’s. Maybe one day we will see them in that role but I think we’re going to have to wait a while to see it.

8 thoughts on “Christopher, Christopher and Associates.”