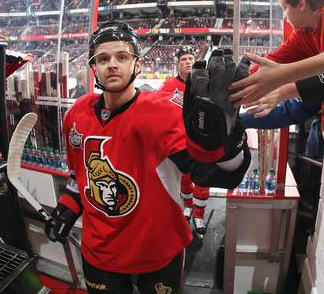 So let’s get right down to it. Our playoff bubble team (flattering!) plays back to back road games against Stenchburgh and St. Louis…3 of 4 points collected. Naturally. Called it. You can read more about these games in my upcoming book “WHY I DO NOT BET MONEY ON HOCKEY: One Special Little Girl’s Journey”
Welp, Buffalo played last night, got thumped by the Pens and are playing in our building so…logic says Ottawa will lose 4-1, all goals scored in the first period? Lone goal for Ottawa a puck bouncing off of Cory Conacher’s neck to cut the deficit to 3?
I don’t really know if I’m kidding. I’ve spent much of my valuable time [Ed Note: Since when, guy who writes about hockey to nobody for free?] writing (flattering!) about how hard it is to get a read on how the Senators are going to perform game to game.
Don’t get me wrong, I love that they seem to bring an extra gear to their games against the best teams in the league because if they make the playoffs they’re definitely going to have to play one of the best team’s in the East. But they have dropped some of their most slam dunk games of the year, which has REALLY hurt them and put them in the must win position they now find themselves in.
This will be an interesting game to see if Ottawa can finally HACK THE BONE when it comes to taking advantage of opportunities to move up the standings. Standings that have thus far not been friendly to them but not like the Sens didn’t get themselves in this spot. Also, who told Carolina (not the name of a US state) that they could even be in the conversation?

Heyyyyyyyyyyyyyyy Turns Out Erik Karlsson Is Amazing At hockey!
I declare tonight to be the beginning of the march to a new milestone.
WTYKY Presents Erik Karlsson: Road To The Twenty Goals Classic.
Who’s comin’ with me?
He got ever so close to the plateau in his Norris winning campaign of 2011-2012 with 19. He is shooting so much this year (a team high 177) I think he can do it. 25 games remain for him to put up the 6 goals needed to hit the mark. No small task for a defenseman but we know that our special little guy (SLG) is more than great coats. He has an hilarious 12 points in his last 11 games. Comedy gold, how good this guy is.

Jason Spezza Is Trolling The Post-Game Call In Show At This Point
With the recent cooling off of Clarke MacArthur and Robert Ryan, the captain has crept into 3rd in points on the team. This is the ultimate Spezz troll, even defenders of him like myself were at their wits end so what does he do? puts up three points against one the best teams in the NHL, scores an absolutely huge goal in the game, oh and to top it off FuCkInG pUlls OfF THiiiiIIiiissSssssS:

Spezz Captain and the Whirl of Tomorrow (you may now close down your browser and come find me and kill me).
He did that against the St. Louis Blues, a team coached by Ken Hitchcock, across their entire D zone…and it worked. Hockey. So this week he was the goat of the Stenchburgh game, the hero of the Blues game…tonight…let’s see him be I don’t know…I would settle for a creamy middle like “extremely competent in his role” against the Sabres.
He’ll be playing between the much improved of late Milan Michalek and Mika Zibanejad OR AS EVERY PLAY BY PLAY GUY CALLS HIM ZA-BIN-A-JAD. It was rumored that Ziba might miss the game thanks to an infection to his hands caused by wearing absolutely filthy mitts in the shootout. The shootout moves, this guy.

DaPpreciation Korner:
Stephane DaCosta deserves a ton of credit for keeping the skills competition alive after Lehner gave up two goals to Oshie and Steen. The Senators sent a pretty big message to SDC by returning Mark Stone to Binghamton today. I didn’t hate his getting called up seeing as DaCosta went back to Bingo and did everything the Sens told him to, but I will admit my stock on him had gotten quite low. I felt like: The kid can definitely complete the bajeezuz (?) out of a pass but…always with the getting rag dolled off the puck.
I think many of us have learned from the Bobby Butler heritage jerseys of the past to be measured in our excitement about call ups but DaCosta has a multi-goal game, the lone goal against the Pens and a huge shootout goal against the Blues and no one can deny that. Of note on his shootout attempt: First at the NHL level…whiiiiiiich was a do or die situation against a guy who just won a Jennings trophy. Im sure MacLean just told him to go out there and HAVE FUN.
Anyway, frere has been very impressive during an important stretch of games. If he can keep it rolling until the Olympic break (is team France in the Olympics? I cant muster enough fucks to look that up) he could very well play the rest of the year with the big club.

On the heels of one of his best performances of the year, Craig Anderson gets the start against former Buffalo Sabre (just warming up for the future) Ryan Miller.
Should be interesting to see how Miller performs tonight. He has been his impressive self despite playing on the Buffalo Sabres. when he is dealt, I hope it is in a division far, far away as Ben Bishop has taught us the dangers of good goaltending on teams that otherwise struggle. Rebuild-shmeebuild, I’m looking forward to playing the new look Jhonas Enroth Sabres at least for a bit.
Miiller’s impressive numbers on the season aside, he’s winless in his last two with a goals against average of 6.00 (!!!!!!!!!!!!!!!!!!!!!!!) including a 5 goal beat down from the Pingus last night. Seeing as this is Buffalo’s final game on a back to back before the Olympic break, let’s hope Ottawa catches Miller day dreaming about Olympic Silver and the sunny shores of some other team.

Puck drop is scheduled for the beginning of the game. GO SENS!