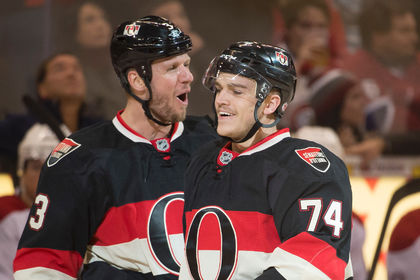 21 NHL games played. 1 point. -2. About 70 penalty minutes. He has a Fenwick For percentage of 46%. (Yost has a good graph here. Basically Borowiecki is barely a replacement level defenceman, and already 25 years old.) He has little experience, little room to grow, and thus no leverage.

Better lock that guy up!

Seriously, this is bizarre, but still accords with the kind of team Ottawa tends to be. Ottawa locks up their young guys early, gives them relatively low contracts on the off-chance that they’ll reach their ceiling and provide value. It’s the kind of thing poor teams do, what poor teams have to do, to gain a competitive edge. The same logic was employed to lock up Jared Cowen, who’d never been a top four defenseman, on the premise that he would become one anyway, and Colin Greening, on the off-chance that he would continue to score goals and be able to play anywhere in the lineup. Sometimes it doesn’t work out.

And sometimes, as with Turris and Anderson, it does. When you get a player at value, it usually more than pays for when the bet doesn’t quite pan out. If Borowiecki turns into our sparkly new Matt Carkner, well, look at what Carkner signed for on Long Island. Borowiecki receives an extremely modest $100,000 raise every year, and will play about 10 minutes a night to show leadership / get punched in the face.

Furthermore, Borowiecki has paid his dues in the Ottawa organization. 185 AHL games, most of which spent as a leader on a competitive team. Maybe it sends a signal to the prospects that if you play the game the way management wants and you work hard enough, you’ll be rewarded.

Or maybe it sends the signal that the team values pugnacity and grit over skill. The bigger issue remains Ottawa’s decision to lock up all of these mediocre defensemen – it’s death by a thousand paper cuts. A bottom half of Borowiecki, Gryba, Phillips, Wiercioch and Cowen does not currently inspire fear. It doesn’t make much sense to give multi-year deals to bottom-half players. These guys are eminently available on the free agent market. How does Joe Corvo get a one year deal, and Borowiecki three?

Weirder is the timing of this extension. With high priority negotiations like Ryan, MacArthur, Methot and maybe even Anderson underway, Ottawa manages to squeeze in the time to extend a guy who isn’t likely to do anything this season to increase his leverage. I mean, whatever – way to be proactive, guys. But they pretty much just made the guy untradeable.

And I’m not trying to read too much into it (like, does the Borowiecki extension mean that Methot negotiations aren’t going well? That Gryba or someone else is about to be traded?).Or the fact that we just locked up a player who’s like a Chris Neil for the back end. Gotta get those quality penalty minutes throughout the lineup. But it’s weird. And as the summer of hockey analytics continues to roll out, seeing your favorite team make a totally weird move like this feels like we’re heading in the opposite direction.