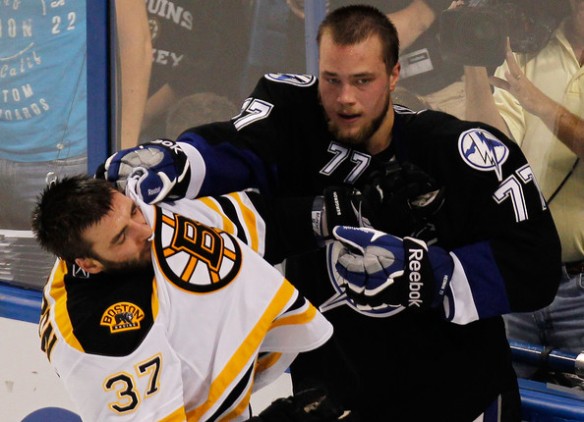 Ottawa has handed out a few extensions and raises lately, and is still trying to sign Marc Methot and Bobby Ryan. If they can get those two under contract, and with new deals due to Mika Zibanejad, Eric Condra, Alex Chiasson, Mark Stone, and Mark Hoffman next season, you might actually see Ottawa crawl out of the bottom five salaries in the NHL. Barely.

But even with this bump in expenditures, Ottawa’s biggest advantage remains its extra cap room and what one presumes to be additional revenues due to the massive regional television deal recently signed with TSN.

A look at Capgeek shows a few teams over the cap. Can Ottawa exploit their unenviable situation and try to pry a useful player away from them in a salary dump? Let’s take a look at the menu.

They’re currently about $5MM over the cap, though most of that will disappear once Chris Pronger’s long-term injured relief kicks in. That hasn’t stopped new GM Ron Hextall from doing the typical Philly thing and retooling his roster in a fundamental way. The appetite is always there in Philly to clear cap space for the next season-defining move. Who might be the next Flyer on a long-term deal to find themselves shipped to a small-town market?

Matt Read – $3.625MM per for four more years – Read seemed poised to become a core player for Philly in his rookie season, but a couple of underwhelming follow-up seasons show him rounding out into a 20-goal, 50 point player. He’s also already 28. But his salary is reasonable, especially when you’re seeing 50 point guys commanding $4MM+ on the open market and the cap is only going up.

Sean Couturier – $1.750MM per for two more years – This is more like it. Couturier has the pedigree, the possession stats, and is only 21. His best years are ahead of him, and he’s due a raise on his modest deal. The fact that he doesn’t have a high ceiling in terms of point production might make him expendable in Philly, where they always seem to be swinging for the fences.

Luke Schenn – $3.6MM for two more years – sure, he’s underperformed, but Luke Schenn has only ever played in big markets with intense pressure. Maybe playing in a smaller market as a second-pairing player with modest expectations would provide the conditions to help him become an effective, reliable defenseman.

This team is in real trouble next season. They’re already $2.2MM over the cap, and the huge extensions to Patrick Kane and Jonathan Toews haven’t even kicked in. Even if they let useful depth defenseman Johnny Oduya walk, the extension to even more valuable Nick Leddy and blossoming power forward Brandon Saad will probably eat up the savings. They probably need to move at least one fairly big ticket forward.

Patrick Sharp – $5.9MM per for three more years – there was a rumour out there months back that Ottawa could move a package of Lazar, a depth roster player like Greening, and Gryba to Chicago in exchange for Sharp. While losing a prospect like Lazar would be a challenge, Sharp has scored over 30 goals four times, and would provide an elite scoring complement to the lineup, relieving some of the pressure on Bobby Ryan. They’d have to give up a lot to get him, and his limited NTC might nix the deal, but it’s a tantalizing thought.

Andrew Shaw – $2MM per for two more years – Shaw is only 23 and already has a 20 goal season under his belt. He’d complement Ottawa’s young team, though we already have our share of undersized, bottom six centers. Would Shaw be redundant, or an upgrade?

Can we talk about how overrated Steve Yzerman is as a GM? Sure, he’s transformed his roster, but only because he’s spent enormous, ridiculous amounts of his owner’s money doing it. This isn’t smart, nuanced decision making; it’s rebuilding a team with a jackhammer and a shotgun. He’s handed out big term and big dollars to everyone from Ryan Callahan to Valteri Filppula, from Matt Carle to Anton Stralman. This team is going to be absolutely screwed in a season or two when they need to extend Brett Connolly and Steve Stamkos, and a year after that when they need a new contract for Jonathan Drouin and Victor Hedman. They have so many middle-of-the-pack players signed to $4M+ deals, and they’re already $2MM over the cap.

Victor Hedman – $4MM per for three more years – doubtful that they’d move this cornerstone defenseman, but Stralman, Carle, and newly acquired Jason Garrison are all making big money and have no trade clauses (because of course they do). It would be an absolute coup to see Hedman playing on the same line as Karlsson.

Ondrej Palat – $3.333MM per for three more years – he’s only 23 and scored 23 goals last year. A promising winger with respectable possession stats to boot. He’s cheap for his production and potential, but an obstacle if you’re a GM like Yzerman who’s hooked on handing out five year deals at $4MM-$5MM per.

They’re only a million or so over the cap, and about four of that is going to come off the cap when Marc Savard goes on long term injured reserve, but they’re heading into renegotiation hell next season with David Krejci and pretty much their entire defensive corps needing new contracts. In fact, Boston is only a couple of seasons away from heading into real decline, all starting with the fact that Zdeno Chara is already 37.

Brad Marchand – $4.5MM per for three more years – hard to imagine Marchand playing for anyone other than the Bruins. (Maybe the Flyers?) But he’s exactly the kind of player you move in situations like this. He’s making big money and is about to exit his prime, but he can still be an effective complementary player on any team’s roster.

Johnny Boychuk – $3.366MM per for one more season – already mentioned in a pie-in-the-sky article suggesting a trade of Edmonton’s Nail Yakupov for Boychuk, but he’s a solid shutdown defender who’s due a raise on a team who doesn’t really have the space to give it to him. If Boston has to choose between Boychuk and Dougie Hamilton, who’s younger and has a higher ceiling, Boychuk might be expendable.

15 thoughts on “Exploiting the Big Spenders and Trolling for Deals”