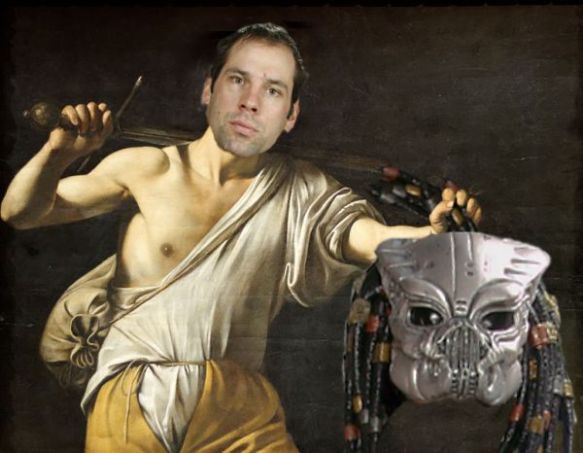 Please to be clicking on this before you start reading:

Let me be the first to formally say iBienvenidos a sus años del Carlosson!

After one of the most exhilarating and optimistic off seasons in team herstory, we emerge from under a pile of melted plastic lawn furniture to cheer OUR Ottawa Senators and their actual playing of games! Now we’ll have some filler to enjoy betwixt arguing about the use or non-use of advanced stats, why we’re upset over Patrick Wiercioch’s lack of playing time or Marc Methot’s contract negotiations (Ed note: Hey dickhead, sign that goddamn contract, you’re being offered years of riding shotgun with one of the world’s best players who’ll probably help you get your next contract too…so, pretty please, STFU and go make millions of dollars already) and get down to some NHL Hockey: The Most SENSUAL Game On Earth’s Ice™. I really like the new slogan the league is going with.

Tonight we officially(?) enter a new era of the team. With Spezza having split, Karlsson at the kontrols, and a cornucopia of kidz on the roster, only one thing is certain going forward: That I remain committed to terrible and insufferable game previews.
COME AWAY WITH ME:

The Kids Are …on the team Alright.
I for one have been waiting for the torch to be passed to a new generation for quite some time now. I’d say since about the trade deadline in 2011 to be exact. It has been a less than smooth ride so far but here we are.
With greenhorns Courteous Lazar, Mark Stone, Alex Chiasson, Mika Zibanejad, Mike Hoffman, Cody Ceci and Mark Borowiecki making up about 40% of the starting lineup I am really getting what I wished for…and more (Borowiecki)
As exciting as new blood is, I am practicing the ancient art of managed expectations. Why? A few reasons:
– Despite making a serious bid for team captain, Lazar has never played an NHL game. There could be a few nerves under that steel.
– For all of our top 6 wishes and caviar dreams, Mark Stone will be playing only his 24th career regular season match tonight.
–  Mike Hoffman is a dynamic young player…who has 6 career NHL points btw.
WAIT WAIT COME BACK! I’M NOT TRYING TO BUM YOU OUT I’M TRYING TO LIGHT A FIRE UNDER YOU!
I actually love how the coach is handling this.
Lazar and Hoffman will start the game under the responsible and disciplined eye of Chris Neil on the fourth line. Meanwhile, Stone will play under the nurturing bosom (sorry, weird of me) of veterinarian center David Legwand (who I sincerely hope scores a goal tonight) and workhorse/clotheshorse Zachariah Smith.
Lazar and Hoffman get the chance to be a little creative while Neil creates space and Stone gets to play shotmaker with a couple of hard working, rugged guys. If Smith and Legwand can crash and bang and get some pucks loose around the front of the net, hopefully Stone can do some of the precise garbage collecting that he’s made a name for himself with.

Gabbin About Tha Gawdz: Top Six Talk
The Platinum Angel express line of MacArthur – Turris – Ryan needs no introduction. Is anyone still adjusting to Clarke MacArthur being one of their favorite players? Me neither. Let’s move on.

The second line of Michalek – Zibanejad – Chiasson is the most intriguing to me. Zibanejad goes into this season with perhaps the most pressure on his Swedish shoulders of Persian-Finnish decent. Coach MacLean has spoken many times of the need to remove the adjective “young” when talking about certain players and he feels at just 120 games and 21 years of age that Zibanejad falls into that Boyz II Men crowd.
As a second line centre he’ll have to put up around 20 more points than he did last season to be considered a success. It’s a steep increase but if he gets the steady ice time that a 2nd line centre should and can play very consistently in that time, it’s possible. However if MacLean gets into his “Everyday I’m shufflin'” business, well, let’s try to keep in mind that he’s 21 and not be too mad at him. Patience. That’s what Legwands R 4.
Milan Michalek is a speedy, defensively sound top 6 winger who puts up around 20 goals or better per season. Lots of fans hate him because something-something injuries. I honestly can’t hate this guy. He’s not the flashiest player in the world but he’s certainly not a liability and has great potential if he can stay healthy. And before you pelt me for sticking up for him, let she/he/they/zhe who is without complaint that Ales Hemsky did not re-sign here cast the first rotten tomato.
Lastly, Alex Chiasson makes his debut to refreshingly little fanfare. I am not going to fan the hype flames either. I want to just let him rock and see what he can do. He is known for coming in…I forget how that goes, but he tends to start the season scoring goals which is exciting because we need those. Apparently Alex had a disappointing season last year by finishing with 33 points. That’s as many points as Zibanejad had to earn him a top 6 spot to start the season so…Either Dallas’ standards are high, the Sens are low or THIS.
I hope these guys can gel quickly because that is a fast, big line to have coming at you.

Cowen is on the first pairing.
Lets pretend this isn’t happening! *takes 10 Zoloft* Ahhh. If there’s one player on the team who can possibly carry this guy it’s Erik Karlsson. God speed to BOTH OF YOU.

Gryba – Borowiecki … Go out there, have fun, and don’t get suspended. Seriously, don’t get fucking suspended.

I have little to say about the defense tonight other than this will be a goddamn psychedelic rock ride. Good luck to each and every last one of us.

Greg Anderton gets the start in net, naturally. He currently sports a 1000 save percentage and 0.00 goals against average. Let’s hope he can maintain those numbers (past the first 10 shots of the game, which will likely come in the first 4 mins b/c see above). What else? His new mask is a different version of his old mask. Oh and his cat’s breath carries a hint of cat food smell.

Oh right about Nashville…lots of new faces here. Human jack-o-lantern Oli Jokinen, the NHL’s first half man – half Chihuahua Mike Ribeiro, Ottawa’s own Derek Roy, and the rest (James Neal, Anton Volchenkov). Damn these guys got up to some stuff in the off season. I’m basically hoping that they need a bit of time to adjust to each other and that our boys can take advantage of that. Olive Garden menu stalwart Pekka Rinne gets the start in net.