Hi, if you follow my DELIGHTFUL garbage on twitter you may be aware of a running joke I dust off virtually every time the team trots out some new trope like “Young and Hungry” or “#FEARLESS” or infinity. My reaction to these…uhh…eventnnouncements is that I need to make some changes and get a job in the Sens PR department (thxu for favouriting and retweeting btw). Each time a say it I am joking less and less…frankly, I wasn’t really in the first place.

After hyping up a big announcement all weekend which turned out to be “Something something Canada am 2017 it’s the millenniums!” the organization decided to “sweeten the announcement pot” by revealing the Sens 25th anniversary patch pictured above. Yeah, that thing is going to be on the uniform. No, not just sometimes…apparently all year.
When they dropped this piece of dog shit on our heads…well, if you spend any time on twitter you’ll know people including myself were worked up over it. Now, getting worked up is not an unusual reaction for the Sensphere, of course, but this feels different than having a grouchy knee jerk take on a trade, free agent signing or draftee. Nah, this felt like the fans were just tired of being embarrassed by the organization with stuff like this.

Yes, I will admit I was I was excited to see it because my Karlsson heritage jersey still needs a captain “C” and I plan to get one this season (Yeah that’s right I was in on that ground floor with this Karlsson guy). Anyway, I thought maybe if the 25 year patch is nice enough that down the road, I’d get one put on there as well. Hey, after all, I paid extra to get the commemorative Heritage Classic game patch put on my Hertiage Classic jersey for no reason other than that it looked really nice. Turns out if the Sens design a nice thing I CANT WAIT TO GIVE THEM MY MONEY FOR IT.
BREAKING: Money is something the team is apparently greatly in need of.

The Heritage design by Le Collectif is so nice that the team basically hung a different colourway of it in front of me and I couldn’t resist it. Why are we not moving forward with it?

Sure, there was a time before the Heritage and, yes, I have a home red. A Daniel Alfredsson #11. I’ll always want something to wear to the game or out playing pick up. It is about repping my city and my team more than looking cool but here’s the thing. In the time since the Heritage jersey came out and I immediately copped one here’s how many times I’ve worn Old Red:

If this doesn’t prove I was wearing that thing more for the name on the back than the logo on the front I don’t know what to tell you.

The first time I pulled on the Heritage jersey, however, was way different. I felt truly proud. The logo, the colours, the shoulder patches, hell, every name and number combo looks good on it. Even Wiercioch’s dreadful 46. So many numbers on the current home and away just look weird. The heritage design was obviously inspired by the simplicity of original 6 teams and when it came out even hockey writers who typically love to go in on Ottawa’s follies had to admit it looked great. Ahh, the Goode Olde Days of the OG 6, it was a special time when you had to win 8 whole games and slip on a puddle of butterscotch to win a Stanley Cup and the simple design of those simpler times also allowed you to get away with a lot. Here’s what we’re competing with in our division alone:
Montreal Canadiens

The colours are admittedly great here. Ah, the red, white and blue of the Canadian flag. WHO KNEW THAT COMBO WOULD WORK!? But Ima call epic bullshit on this logo. We’re just used to it more than it’s at all nice. That C is stupid and weirdly stretched out in a way that would never fly if it wasn’t so old. Also, H? Can’t spell mHoHnHtHrHeHaHl cHaHnHaHdHiHeHnHs without it. OHhhhh, OHHHHHH my bad turns out it stands for “Club d’Hockey.” Oh, donc, je m’excuse! #ACTUELLEMENT THAT’S NOT THE NAME OF THE FUCKING TEAM.

It’s bad enough Montreal has a spelling error this one has a grammar error. Do not try to #actually me on that army squadron name thing. Just because some military guy made it up don’t mean it looks right. Isn’t that right, several borders drawn by European colonialists in the Middle East / Africa!? Also, very creative using the national symbol as a logo. Personally, I would have went with the Toronto Canadians…toss an “H” in the mix just to make it real.

K, this one isn’t fair. I’m not asking for the moon here. I’m of the opinion that a sports logo should be simple enough that a child could draw it but this one gets a pass. I don’t care if your kid is Michael Angelos or Leo Nardodelvinchi, they’d only capture but a whisper of the conceptual majik going on here. This is like the Nick Lidstrom of designs. Quietly destroying the opposition…Fuck you, Detroit. Their logo should be a horse shoe.

HOTTT TIP 4 All U YUNG D-ZIGN’RS OUT THERE:
Follow the Major Legaue’s Basebulb model. The teams are so old that the league is just rich with amazing unis…and here’s the secret, they all tend to look pretty much the same and that is okay. Here, I’ll take a team that I’m not even a fan of and, as such, will make an unbiased case as a uniform done right: 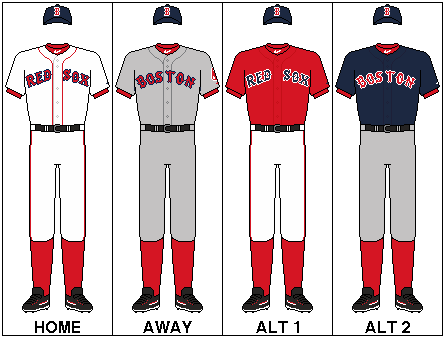 See…it’s not that harrrrrrrrrrrrrrd.
Notice the wild variations on the hat…NONE. Look at all the piping, striping and funky accents: Not that much if any! Sure, the word SOCKS is spelled incorrectly but this thing is so clean (with just the tiniest bit of flare) that I’ma let it cook. Alright, maybe the red one’s a touch zesty for me. This design is so nice your team can trade one of the greatest players of all time to your hated rival and become a laughing stock in their wake for nearly a century and you can STILL not feel embarrassed by what you’re wearing to the ball yard for up to 86 years!
Heyyy speaking of embarrassment, even the Toronto Maple Leafs of baseball have a pretty damn tight kit they can at least be proud of:

Baseball: Just write the goddamn name of the city or team across the chest and put the first letter of the city and or team name on the cap and BOOM, stack paper.
But beware, even baseball has its horrid moments when a team tries to think outside the bun!
Just ask…

Now THIS is happening:

Real Talk: That pirate head is not exactly worlds away from our 3D logo guy.

In conclusion, I care so much about stuff like this because we as Sens fans have SO LITTLE to hang our collective hat on. The most our franchise has done in just over two decades is get destroyed in one Stanley Cup Final…against the motherfucking Mighty Ducks THE ONLY TEAM WE COULD ACTUALLY LOOK DOWN ON UP UNTIL THAT POINT.
This year our expansion sister franchise Tampa Bay nearly won their second Stanley Cup for their adoring legion of Canadian retirees who go to their games when wintering in Florida. If Ottawa was in the hunt for Cup number 2? Shit like this wouldn’t even be on my radar screen of things I care about. I would do 100 years of SNES garbage for one Cup in my lifetime. EVEN CAROLINA HAS ONE. See what I’m sayin?
Planting a team in between two of the oldest and most storied franchises like Montreal and sort of Toronto, surviving bankruptcy and currently navigating still more economically uncertain times, making it to 25 years is actually a big fucking deal to us as fans. How the the Senators design team and focus group (maybe?) thought that:
An even shinier version of our widely derided 3D logo (even if you like it, it’s undeniable that league-wide it ranks in the bottom 10 or even 5 of any rating you look up), stacked on  a font I’ve never seen connected to the team before, stacked on some out of place Wrestlemania lookin ass Roman numeral mess, stacked on dates that look more like an obituary than a celebration of legacy was acceptable is beyond me. Then again, they haven’t paid attention to how no one outside of our own fans thinks our current logo is at all good since the emergence of the Senagoth a decade ago. If we’re going to play like Cowen can we not at least look like Karlsson?
I thought with the heritage we were turning a corner but stuff like this makes me think it might have been an anomaly.
Yeah, I’ve heard it…the O looks like a zero for how many Cups the team’s won. Guess what: that’s true. Also, let me think of a way to fix that …hmmmmmmmmmmmm…mmm.

Until then, crap like this logo “celebrating” the Senators will continue be embarrassing to the legacy we are still trying to build around the team we so love.
Now that I think of it, the Heritage jersey design itself started as an online petition by a fan who was fed up with the team’s poor design choices….maybe we’ve still got 2 years to make this thing right.

4 thoughts on “Summer Reading: Hi, this logo thing is a piece of shit.”