Luke Peristy and I had a conversation about something that happened over 23 years ago. 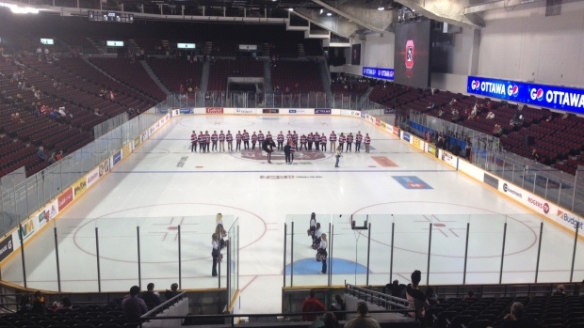 The Ottawa Civic Centre: When you DON’T gotta hear both sides.

LUKE: Have you heard the one about how the Sens’ success is unsustainable?

CHET: Remind me how that one goes.

LUKE: It’s a classic rock hit by PDO Speedwagon. I won’t bore you with the details, but I think if you want to see real unsustainable success, you’ve got to go all the way back to the Sens’ first game.

CHET: Oh, this is a deep cut. This is like that Japanese PDO Speedwagon bootleg you keep telling me to listen to. I promise I’ll get to it once I get through all these GVT Mule live sets. But sure, let’s watch this 1992 broadcast introducing the first ever Ottawa Senators game.

It starts with an ad for a funeral home. Nothing to worry about, soon-to-be Senators fans.

LUKE: “Local ownership since 1925”. Obviously this commercial is from before Big Funeral bought up all the small boutique places and started outsourcing casket manufacturing to developing countries like Brazil and China to increase profits.

Then suddenly there’s that low synth note and the dramatic flair of electronic trumpets that tells us this is indeed a presentation of CBC Sports. Can you feel the excitement?

CHET: That is pretty good CG for a public broadcaster in 1992. Especially since it follows a CBC Ottawa affiliate promo where somebody said, “We can’t afford this new-fangled computer wizardry, we’ll dazzle people the old-fashioned way – with a magician.” More proof that progress is robbing us of our humanity.

So we get a CBC flyover of Parliament Hill that shows us that: a) the Ottawa skyline hasn’t changed that much in 25 years; b) CBC is not afraid to jazz up a flyover with fake helicopter noise; and c) nobody realized Ron MacLean was going to have to shout over a fake helicopter to introduce the Ottawa Senators for the first time. But from humble origins come great things.

LUKE: You think that’s fake helicopter noise? I’d just assumed that we didn’t know how to mute audio back in 1992.

LUKE: Let’s talk about what’s really important here though: does anyone do over-the-top sports programming introductions like Ron MacLean? It’s like he’s trying to be the Canadian James Joyce. “Long before the invention of the television, a country and its pastime came together here in a place that will again be the setting for a historic mix of society and sport.” That’s an awfully lofty turn of phrase when you’re introducing a rag-tag group of replacement-level players who are going to lose a great many games in front of a mostly drunk Civic Centre crowd.

CHET: It’s a little purple. They interrupt him with the Peace Tower bells, like he’s being played off on some kind of Victorian Gong Show.

LUKE: But I guess this is more evidence that Ron’s a natural choice for Hometown Hockey. Ron MacLean can infuse anything with a level of romantic Canadiana rarely seen outside of Gordon Lightfoot.

CHET: I’m pretty sure I remember a late 90s Coach’s Corner segment during Sens-Leafs game where Ron said, “Sundin! You better take care, if we find you’ve been creepin’ round Denny Lambert!” And Don Cherry just stared at him for like a minute.

So they start showing all the black-and-white pictures of the old Ottawa teams, and newspapers with headlines like “OTTAWAS WIN THE STANLEY CUP” (this is back when they were the Arnprior Ottawas, before they figured out a location for a downtown rink), and then a bunch of old hand-cranked footage that looks like roller derby in a cave, or that time Matt Kassian was sent out on the power play.

LUKE: This old black-and-white hockey footage is great, but it leaves out the best part of Olde Tyme Hockey: the names! Check out “Rat” Westwick, the original Brendan Gallagher. Opposing players slashed this guy’s ankles so hard that he needed to get his leg amputated below the knee! Cyclone Taylor once punched a lacrosse referee in the face, made more money than the Prime Minister playing for a hockey team in Renfrew, and still had enough time to refuse to allow a boat full of immigrants to land in Vancouver in 1914.They do not make them like they used to. God only knows what sort of shenanigans Battleship Leduc got up to in his spare time.

CHET: Now CBC shows us what life in Ottawa was like without an NHL team. It’s an old guy on the canal in a Habs jersey! Thank God we don’t see that anymore. Oh wait, we do! That old guy is probably still around, too. He’s 104, and right now he’s wearing a Plekanec jersey at Bar Le Whip, yelling about how Erik Karlsson never should have won a Norris and drinking Calvados he brought himself. They can’t throw him out because his great-granddaughter works there and is the only one who knows how to fix the video poker terminal.

Finally our shaky CBC helicopter takes us over the old Lansdowne Park and shows us the FORMER largest parking lot in eastern Ontario. And now it’s just another Whole Foods. More proof that progress is robbing us of our humanity.

LUKE: I can never decide if putting the Civic Centre underneath a set of football bleachers was an inspired space saving move, or the laziest piece of engineering/architecture I’ve ever seen. I get the feeling someone said, “Screw it, let’s just put all the sports in the same place” when they were designing it. This strategy was much less successful when they were designing the now-legendary Ottawa Zoo.

CHET: You mean Parliament? What a mix of society and sport! *Peace Tower bells play me off*

LUKE: Ok, then a solemn Old White Man intones that the NHL is granting conditional franchises to the applicants representing the City of Ottawa . . . and then he’s cut off by Ron MacLean. Whatever happened to that other applicant? Did they ever amount to anything?

CHET: I think Ron is just tired of that guy dragging out the big announcement with all those dramatic little pauses and sly grins. Get to it, man; it’s an expansion team, not a Showcase Showdown.

LUKE: Everything I’ve ever read about the expansion bid for the Senators makes me think it basically consisted of Bruce Firestone getting drunk with his buddies and saying, “I could totally start a hockey teammm . . . WWATCH ME!” I once heard that the Senators sent their official bid from Ottawa to New York City in a limousine because they thought it would impress the NHL brass more than if they just sent it via FedEx like normal people. Their official presentation to the NHL in 1990 had a marching band in it, for God’s sake. This franchise comes by its penchant for lame gestures honestly.

CHET: It’s hard to believe the NHL ever granted an expansion franchise to a team whose initial plan was “barely convert a 10,000 seat junior hockey arena”. This is a league that’s probably going to squeeze $500M out of Quebec City at some point, and those guys don’t even have electricity. But in 1992 you’ve got the Ottawa Senators playing actual games in a one-sided rink that they’ve decorated with balloons and streamers. More proof that progress is robbing us of our humanity.

LUKE: “It’s a one-sided rink really, but there’ll be some one-sided games . . .” You know what, I’m not even going to try to top that. I gotta let Ron cook on this one.

CHET: So then we actually see Ron, and he looks exactly like Alan Partridge, and then refers to people showing up in togas by saying “the sheets have hit the fans,” which is pretty much exactly what Alan Partridge would say in this situation. Today this man may be Canada’s most respected sports broadcaster. Nice Ron Burgundy jacket, by the way.

LUKE: “You can see the fog in the background from the dry ice for a special ceremony,” he says, as if he’s reporting live from a Bon Jovi concert. What pattern would you say Ron’s tie is? I’m going with “Paisley Having an Acid Flashback”.

One guy who doesn’t look any younger in this clip is Bob Cole. I’m beginning to think he has that version of Benjamin Button disease where you’re born old and you just stay like that. He sounds exactly the same, though. I think he just mistook Laurie Boschman for Darcy Tucker, who isn’t even in the league yet.

LUKE: It’s easy to think of Bob Cole as The Old Guy in the Booth, but Dick Irvin was the original! He’s a whole year older than Bob Cole, so you know he EARNED that title. And peep Cole’s fledgling skullet game.

CHET: His combover looks like roof of the Skydome.

LUKE: He’s only a few months away from going Full Iafrate.

CHET: Finally burgeoning Sens fans can get excited as CBC puts up two smoldering pictures of their early stars, Sylvain Turgeon and Peter Sidorkiewicz. Both will be out of the league in a couple years, but here they look tough and moody, like two guys who aren’t afraid to start their own C++ club.

LUKE: Harry Neale’s talking about Turgeon’s 222 career goals and referring to him as the only bonafide sniper on the team, but if Sens Twitter had been around in 1992 you know Turgeon would be reviled as “not the type of player you want to build around”.

CHET: Sens Twitter would already be making jokes about how they should bring the magician back.

LUKE: Then they’d tell you the magician is a perfect metaphor for this season so far: all smoke and mirrors. Just like a PDO Speedwagon show.