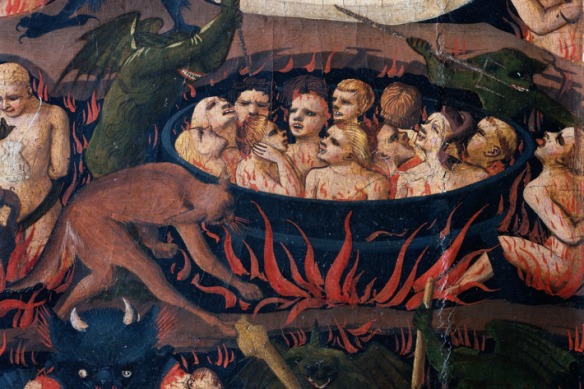 I have no interest in listing here the most recent iterations of our daily hell, the various, sordid events and utterances of the Ottawa Senators brain trust that comprise what we can now confidently call the most disastrous year in the history of the Ottawa Senators. It’s been bad, but this isn’t some run-of-the-mill bad experience like your best player getting hurt for a season, or missing the playoffs by a point after losing the last game of the season in a shootout. No, we’re not so lucky as to be a Florida Panthers or Carolina Hurricanes, perpetual also-rans who aspire to scary goodness. The 2017-2018 Ottawa Senators were the kind of bad that should have any sane person questioning if they can go on being a fan of this team at all.

Suffice it to say that there are tiers of awfulness, each with corresponding degrees of despair that impact one’s enthusiasm and ability to interact with a team. They are, as far as I can tell, roughly as follows:

At one point or another this year, the Senators have existed in one or more of these tiers. Pending the outcome of the Randy Lee trial, the Senators are even getting into solid No Fucking Around, We All Need to Move On territory. It begs the question: what are the limits of loyalty in a universe of entertainments offered by questionable people? How could a person possibly justify continued allegiance to something as ultimately arbitrary as a good game of puck-n’-stick amid all of this ugliness? At this point, it’s not only a matter of frustration or of not wanting to be accused of being a fair-weather fan. We are faced with a situation where if somebody accuses you of not being a real fan you might be able to credibly say, “The Assistant GM tried to coerce a 19-year-old into fucking him.” We’re a few short months away from being asked by various hockey writers to carefully consider the Senators development camp and pre-game schedule, as if we don’t live exclusively inside the sucking sound of an airplane toilet. What are we possibly expected to do when confronted with that absurdity, that clarion-clear declaration of moral stupidity as the waves of content wash over our borders? Oh, no! Is Patrick Sieloff getting too much ice time? The Assistant GM tried to coerce a 19-year-old into fucking him. Is the coach playing a talented forward with Tom Pyatt? The Assistant GM tried to coerce a 19-year-old into fucking him. Should we have taken Zadina over Tkachuk? THE ASSISTANT GM TRIED TO COERCE A 19-YEAR-OLD INTO FUCKING HIM. How can we possibly get up for reading a team-by-team Off Season Winners and Losers post that is destined to replace Ottawa’s letter grade with an ancient incantation that you die when you read?

Here are four strategies that I have, at various times over the past few months, contemplated employing in some desperate attempt to stay a fan of this thing I used to love.

This is the equivalent of Chief Bromden smothering Randle McMurphy with a pillow, except in this scenario the Senators fan is both the euthanizer and euthanized. It involves the willful negation of one’s critical faculty, which shouldn’t be too hard because we decided to be sports fans in the first place (hey-oh!). To employ this strategy is to  remove even that basest of discerning qualities: the ostensible selection of a favorite team based on its questionable affiliation with the city one lives in or used to live in. This strategy is tantamount to attending a conference about dairy farming and hearing a former Olympian give a speech about the nature of excellence: it means anything to anyone which means it means nothing to anybody.

This is the way my dad enjoys sports. He stands up and cheers when either team scores. He seems pretty happy. You could take him to a 6-2 game between the last place and second-last place teams and he’d exclaim as he left, “that was close one!” He’s not stupid. He built an electric scooter out of spare parts and designs telecom networks for a living. He just has his priorities straight.

I’ve seen a few people here and there declare (mostly on Twitter, which seems designed to facilitate doubling-down on the morally dubious) that they will remain Ottawa Senators fans no matter what. Obviously, it’s possible to admire this, but I’m not sure what they mean, really, when they say they’ll stay a fan. Is it possible to be a fan of a team that is equal parts bad, not entertaining, and evil all at the same time? What does being a fan look like? Is it attending games and having fun despite all of these things, or refusing to emphasize these things at all? Would the feelings of joy or pain at wins and losses be genuine feelings with some semblance of your brain containing information about what’s happened this year? Can people turn it off and on like that? One could, I suppose, find some meaning in the stubbornness of the act, the resolute, unapologetic, politically incorrect loyalty to a compromised thing because it’s Our Thing. One might wear a SNES jersey, insisting it an underappreciated design, down Bank Street and past the Redblacks game, with all of its happy fans, and hold up that “number one” finger and say, full of sincerity, “we’re the best!” and it would elicit at least sympathy from others.

“The arc of the moral universe is long, but it bends toward justice” is something that you might be tempted to say about this situation but it wouldn’t be appropriate because we’re talking about a fucking hockey team and not civil rights. Put another way: people’s memories are short and you should know that this suckiness, too, shall pass in time. The intervening year(s) tuning out from this team and tuning into something else will reveal themselves to be all of the time you’re always talking about not having enough of. You don’t have to snuff out your fandom like a puppy you drown in the basement sink. Just freeze that puppy in the basement freezer to be taken out some years later when the team has been sold and Chabot is being traded for futures and it looks like we’re about to embark on a fool-proof rebuild where every second-round pick hatches like a Yoshi egg to reveal a perfectly serviceable third-line winger. Someday this team will be owned by somebody just evil enough to ignore, and it will be okay to be a fan again.

This is a tough one. Even after everything I’ve written above, this feels sort of drastic and I don’t know if I’m there yet. I can’t help but feel, however, like to do anything less than swear off the Senators for good is a little bit like justifying enjoying Woody Allen movies because we’re just sooooo good at keeping the art separate from the artist. Is that what we’re good at or are we actually good at keeping our humanity separate from our nostalgia for long playoff runs, 11:11 “Alfie” chants, and Zdeno Chara rag-dolling McCabe? Why hold on in the face of utter futility and Melnyk’s omnipresent dourness? Those memories will still be there. Alfie is still out there, playing ping-pong, getting happily fatter. There are 30 other teams in the league vying for our attention, to say nothing of the other hockey leagues, other sports, and entirely different interests. I found out the other day that Ottawa 67s season’s tickets are $400. $400!!! That’s the price of a game-worn David Legwand jersey, who was a player Ottawa voluntarily signed during free agency after which he scored 27 points in 80 games in one season with the team. The 67s have the added advantage of playing in a newly-renovated arena located downtown, which is something we’re still a public feud about financing away from achieving with the Senators. And, in years to come, if asked why you don’t follow the Senators anymore, you can say, “I stopped following the team after the 2016-2017 season,” and people will absolutely know what you’re talking about without further detail. Because, odds are, you won’t be the only one they’ve encountered.

So: what are you supposed to do? Yes, you, reading this blog, risking discovery by your boss, ready to flush it all away for some clarity in these trying times. Well, I’ve designed the following handy decision-tree to help you decide which strategy will guide you back to happiness and health.

WHAT IS YOUR FAVORITE KIND OF SENATOR?