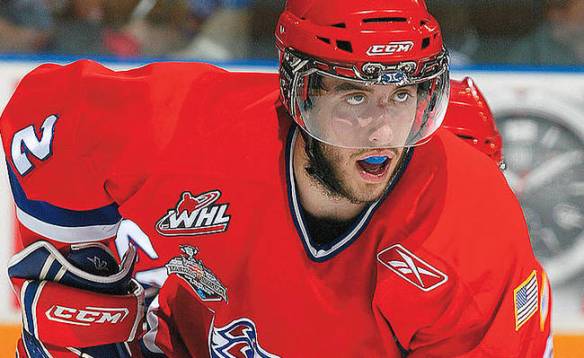 I know the rebuttals on junior numbers but is anyone else at least kiiiiiiiiiiiiiiiiind of pumped on these figures?

I mean, he might be on some ‘man playing against boys’ shit (a man that was too young to play in the AHL) but +44 outside the QMJHL is +44 outside the QMJHL!
Also, 47 points in 55 games? Maybe I don’t keep as close an eye on the WHL as I should (I definitely TiVO all Spokane Chiefs and Brandon WheatKings games) but I had heard Cowan was given orders to step up his offensive game this season and…that’s a pretty awesome step up to get one’s rep up. I mean, on the Sens squad I don’t picture 18 goals or even 10 at the NHL level but I definitely love seeing a top prospect improving greatly!

Yeah, it’s pretty impressive. I read some kind of report that said he’s playing in literally every situation. First unit PP, PK, last minute of play when down a goal, extra attacker…it really makes the argument that these kids should be returned to junior and get more playing time. I look at Edmonton, and how they’ve burnt a year on the entry level deals of all of their awesome young players so that they could still come in dead last in the league, and I wonder what the advantage is of exposing your future to intense scrutiny and losing. They’ll have to start letting guys walk because of the cap long before they’ll ever be able to develop a defense to support them.
I also love how Cowen looks perpetually stoned. Like a really chill guy. He won’t make a big thing out of it, even as he casually checks a fourteen year old through the glass and into the third row.
You know who else’s numbers are really awesome, and who gets (relatively) no respect? Barry Brust.
I meant, I get it, guy is on his third NHL team at 27, has played all over the minors, couldn’t stick with LA when they had literally no one to play in net, and so he’s basically blacklisted as a career AHLer at this point, but can we give this guy a game already? Maybe I’ve got a case of the Mike Brodeurs here, but Lehner can get blown out and no one questions that he’s still the GOALIE OF (FROM) THE FUTURE. Can we extend mayhaps about 14% of the same benefit of the doubt to a guy who’s playing his brains out every night? The team wouldn’t dare piss off Anderson, considering the entire city is collectively trying to get into his pants, but y’know, I could use a little Brust in my life. Let’s see what he’s got.

I have to say, Brust seems to have the respect of Binghamton’s fans and I mean…thats pretty cool when you play in Binghamton. I read an article in the Citizen about how they have a very hot selling “In Brust We Trust” T shirt. He’s for sure a fan fave down there. I think we all get a little bummed out about the bizarro hierarchical aspect of pro sports. Im sure its tough for older dudes like Brodeur and Brust to see a 19yr old with more “Pedigree” swoop in and get starts right away in the AHL and the NHL. I mean did I wish Denis Hamel got more chances in Ottawa back in the day? Yeah, but I also think it was cool that he became the Daniel Alfredsson of Binghamton. Maybe Barry Brust becomes the….actual…uhhh…good and consistent goalie that I cant find a comparison to in Sens history but for Bingo. Hey! Truth is I think its important for Bingo to make the playoffs, now that the Sens stink and I care so much about farm teams and prospects, and Brust has become their answer. Keep doin what youre doing Brusty! Maybe he keeps it up and becomes the next Tim Thomas! On the more cynical side, Im pretty sure AHL players make between 60 and 90 grand a year which…you know…is not the worst thing in the world. I agree give him a start here and there for corn’s sake he’s earned it but not during the AHL playoff hunt when he is the hot hand.

As for Cowen…HA! I couldn’t agree more! Every time I see him in an interview I expect him to sound like “DURRRR STAY OUTTA RIVERDALE!!” and am taken aback for a second when he’s just a sober, well spoken young man.

I am all for not pissing off Anderson, its not every day that there’s a guy who was a Vezina finalist in the mix of possibilities for starter going forward. I know youre heavily in favour of the Auntie (that’s right) Niemi, Bobby Boucher approach to net minding but I still have the mantra NO MORE BRIAN ELLIOTS aka AHL level goaltender playing the whole damn season. Im comfortable with the Sens not being great for a while but as we saw with the wrong goalie in net they can easily be the WORST on some 6 goals allowed EVERY game level…and thats hard to even tune into.

Well, I’m for the Niemi / Boucher / literally whoever mode of goaltending when you have Duncan Keith or Chris Pronger on D. Otherwise, yeah, I say get yourself a goalie who can play 🙂

FINE I WILL! i mean…True indeed. Maybe the Sens can be that one day, if they keep using their top picks to draft defensemen
🙂 🙂