To the two guys I talk to the most about the Sens, I propose we have e-mail conversations about the team and then post that shit on a blog. Like our own blog, not on another person’s blog. It’ll be wonderful and terrible. And because this is Ottawa we’ll have literally dozens of readers. Waddya say.

Peter to James, Conrad
10:52 AM
Sounds good to me. I propose we examine the merits of Don Brennan’s friday SUN article. Basically it lays out a plan to pursue Sheldon Souray. Not surprisingly the comments feature of the page has been turned off. Also the term “fancy pants” makes an appearance which might be a print journalism term but has no place on the internet.

Truly staggering logic at play there.

“The most glaring need right now is for at least one rugged defenceman.”

“The Oilers are getting rid of Sheldon Souray — he cleared waivers last Saturday — and, with that big booming shot and his toughness, he’d look good in a Senators jersey.”

He seems to be confusing “rugged” and “toughness,” which basically means “a jerk,” with “shot blocking / checking / shut down”. Souray is so durable and tough and rugged that he’s only played a full season twice in his career. Plus, and this is only slightly related, he’s a – 52. So clearly Brennan is grasping at straws.

Which doesn’t necessarily mean that they shouldn’t pick him up, especially if the Oilers put him on re-entry waivers and pick up half his salary. Would you take Souray at $2.7M for another 2 seasons? The Sens have $3M in cap space without contracts for Campoli, Foligno or Regin so they’d have to move somebody out.

James to me, peter
12:31 PM
Can’t you see with the recent addition of Sergei Gonchar that there is a glaring hole on the back end on our powerplay? Seriously? Souray? Seriously? Fine, Souray’s shot is break the glass twice in one game hard…but its typically reserved for the power play…which we just got Gonchar for…and have Karlsson for…and have Kuba for…and even Campoli for…and allegedy Lee for. This is an insane idea. You beat me to it Conrad, Souray does not exactly have an iron man rep since leaving Montreal. I paid pretty close attention to him last year as I stupidly picked him for my fantasy team (tip: always pick Edmonton Oilers!) He was on the IR practically all year…I think he was out for something like 9 months last season…I mean head injuries are super rough and long lasting but I don’t know how picking a guy up off WAIVERS who got dropped by the WORST TEAM IN THE LEAGUE and basically hasn’t played hockey in a YEAR is a plan worth writing about. The Ottawa sun is entering its white album years…anything goes now. Does he know we’ve already recently waived our own player who makes way too much money and hasn’t been the same since being badly injured years back? (oh and we have a goalie like that too!) Lets GAMBLE!
Also, Conrad I think it’s unfair that you’re imposing the team’s cap restrictions in comparison to unsigned roster players on Don. He doesn’t know what that is and youre only going to get him riled up and you don’t want that! Ask George LaRacque how embarrassing it is to turn down fighting a man who is over the age 30 but has frosted tips.

Okay so im totally into starting a sens blog. What with my emails typically being longer than a blog post, Conrad’s your recent foray into fan posting on silver seven and my recent introduction to the fact that Peter also likes sending emails about hockey it’s a logical fit.

Idea: have a special weekly themed posting that just makes fun of a recent slam! Sports/ Off the posts article/spelling mistakes. Just sayin I likes me to make fun of Don Brennan and Malkin to the Kings.

Anyway this is a really fun idea.

We need a title.

How about we get the domain Senspuncentral before the sun does (its double dantastic!) just kidding, ha! (Alf reference) how about Corey Clouston Fasion Report? 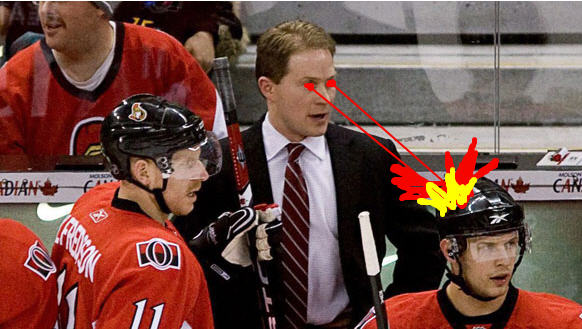 I’m thinking we just post everything. The entire conversation. It’ll be our schtick. It’s like getting nothing but the comments. Or a podcast from 1917 that you run through a phonograph. It will be a complete shitshow and, as such, only three to four times better than The Sun’s analysis.

I’m a fan of CCFR for a name. Also any name involving Vaclav Varada who, I hear, is now the mayor of a town in Middle Earth.

Agreed on the following points 1) That Souray would be a monumentally absurd pickup given the players we have under contract, and 2) Don Brennan writes his articles on the OC Transpo on the way to the office. Watch for a “Sens should sign Mike Modano” article any day now.

What’s going on with these RFAs? Regin and Campoli in arbitration. Let’s say they get Regin under contract for $2M or under (I keep hearing $2M and that seems stupidly high to me for a 29 point season, no matter how well he was playing toward the end there. Yes, I am aware that he scored 46 points in 36 games with Herning Blue Fox-Denmark back in 04-05. But they were due!) Campoli is sort of a question mark – one of those players that I wouldn’t be surprised to see re-signed for only slightly more than the bottlecaps he’s being paid now, and also wouldn’t be surprised to see get tripled. He can play 15 minutes a night, is young, occasionally puts up some numbers. He’s a solid second pairing d-man on…the Islanders, at least.

How much do you pay Foligno? Hard working guy who can’t seem to break the second line. James, I remember a time right before he broke his leg and missed a month when you and I’d be watching the game and both sort of look at each other like “Is Foligno the best player on the ice right now?”

Conrad to James, Peter
1:11 PM
Check out this great quote from Gonchar.

“Up to the last minute, I was hoping I would get the deal done with Pittsburgh, but unfortunately it didn’t work out and here I am in Ottawa.”

Man does that make me want to buy season tickets.

Between this and Kovalev’s “I have a new team. But would love to retire a Hab” I’m thinking the Sens have the best team at the Freedom 55 resort.

The trade proposals for Souray are what make the article for me. 3 for 1? That’s just laziness. If he were to clear waivers, he’d probably land somewhere like Columbus where risky personel moves are met with a hearty “meh”.

I suppose we could pick him up but given his injury history and questionable attitude why would we ask him to play physical, high energy hockey? I don’t want to hold my breath everytime he gets in the way of a slapshot. His walking-tour guide to downtown Edmonton is a joy to read, but sorry I’m going to need more from Sheldog.

I do agree that Cowan should see some ice early this season. But everywhere else Don and I differ. Saying someone would look good in team x’s jersey is about the least creative, throw-away phrase is sports writing today. I like that Don mentions it early in the article so I can take it as a signal to immediately disregard every key stroke that follows. That’s a nice time saver. Sheldon Souray would look like a thawed out caveman in a sens jersey, and every other jersey.

My suggestions for titles, stemming from the whole Senators ancient rome theme are probably too obscure:

Raped by Mars
Plebeians vs Patricians

-Put a Bonk on it

Im going to give the two quotes a pass. But Holy shit Ottawa as a city gets hated on so much lately. Seriously starting to get exhausting. Like, god, people can I please just like my hometown for five minutes?
Silver lining: all the more reason for it to be shitty to be an Ottawa based leafs fan, your own fellow fans constantly putting down where you’re from…PLUS, youre a leafs fan. Meta self-loathing.
Worst part: Larry O’Brian most enthusiastic person about city.

anyway, I’m getting the impression that Russians are more blunt than we’re used to when answering these, what I feel are backhanded, questions like
“Are you disappointed that you didn’t get to resign with the Penguins (whom you’ve played with for years and won the Stanley cup with 25 months ago with and has been doing better than the team you just signed with AND has two of the worlds best players)?”
I mean, that answer kind of bummed me out too but ill cut the guy some slack considering he’s doing a press conference in his second or maybe even third language. I find the Dimitry Chenokov Russian language interviews have helped me get used to a certain demeanor that I am noticing among Russian players. I have to say I really like it too. I’ve also learned that Pavel Datsuk has an amazing self deprecating sense of humor.
Well, except actually cant really speak for Kovalev who is like…the Franz Kafka of sports.

Ian Mendez: “Alex, do you think youre gripping your stick too tight in the midst of this 16 game scoring drought?”
Kovalev not even looking up the vivid woodcut of a saber toothed tiger he’s working on: “We a plague ridden festoon of nightmarescapes masquerading as a society. Perhaps it is you that is experiencing a scoring drought of the mind”
–          Dead silence and blank stares in the locker room save for Spezza laughing with equal enthusiasm at each time a new pez candy comes out of his Donald duck shaped dispenser

I think the train of emails schtick is amazing!
it also ensure the sun and its writers will be mocked constantly.
…there will be many more MS Paint wonders to come…
all i need are more ‘quality time’ pictures of Papa Alfie and Karlsson