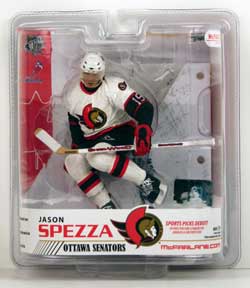 Letters from The CCFR to Lisping Santa

I know you read The Cory Clouston Fashion Review, and respect us despite the fact that we don’t have any connections and so don’t break any news, and don’t provide any real analysis, and asking us if a player with an expiring contract will be an RFA or a UFA is like asking us to take the Pepsi Taste Test. Nonetheless, I know you’ve been reading me on the Review saying that you need to rebuild. I’ve been calling on you to trade Phillips, Ruutu, Kovalev, Spezza, Clouston, Spartacat and the zamboni for prospects. But things are different now. We’ve won two in a row, and according to TSN’s standings, we’re tied for the final playoff spot. I’m a man. I can admit when I’m wrong.

Hey, I got your email the other day. I assume it was from you. It was Senators spam thing about tickets. Are you really offering three tickets to three different games for $129 total? And one of those games is against Toronto, your cash cow? And are you really selling jersies two for one? That’s fucking crazy, Bryan. What next? Chris Neil will wash my van if I buy a van? Are things really that dire? I’ll tell you what: you mail me the four Subway vouchers I was promised with my Sens Family Pax, and I’ll purchase another package with such low profit margins that you’re basically begging me to just come buy an $11 beer.

Anyway, keep up the good work!

P.S. Trade Leclaire and a 2nd round pick for Vermette.

Please schedule any and all remaining NHL games against the New York Islanders. Also, consider investigating what the Isles are doing in April through June. Perhaps a small wager or ceremonial goo-gaa could be placed up for competition? I think the “Job Security Cup” would be excellent. I’d be happy to perform any exploratory research on this should you require assistance.

Enclosed you will find a set of hands posthumously removed from NHL great Frank Finnegan. Please ensure they find their way to Peter Regin. (Yeah, he had two points last night, I know. Finnegan had three and a fight!)

Also, please ensure Conrad gets his complementary Subway coupons. We here at the CCFR are frankly getting tired of the bitching. (Just kidding c-rad) [Ed’s note: no you’re not] Consider installing a Subway franchise on Scotiabank premises, that way the next time the promotion goes into effect the riots for the last meatball will be more entertaining than the game.

Sorry boys, didn’t catch the game last night so I’m resorting to passive aggressive digs at Peter Regin, Conrad and I guess Frank Finnegan too. Kudos to Spezza for fucking shit up. And Belliott looked sharp too.

Saturday night date with Habs. God, half of me want to avoid this game like the plague and the other half wants Ottawa to rape and pillage. It’s swim test anxiety all over again!!!

And now, because we’re not coordinated or committed to a theme, James’ recap.

Sens I would perform the entire score of the H.M.S. Pinafore for…

Jason Pizza. And not just because I have him in my pool! Now that’s what I call …help me out here Ottawa Sun…Spezzawesome! Guy was a beast. Plus 4 on the night. Really showing the best side of his rare skill set. Skating well. Looking healthy…didn’t get hurt when hit from behind. What else could this guy have done last night? Fight? Remember when Spezza fought Dion Phaneuf in Calgary? Just kidding, keep those mysterious hands healthy for toe drags and other white magic like setting up DAVID HALE for a goal! Haters gonna hate Spezza but on a night like last night…Lovers gonna loooooove.

Bri-Bri Destiny Elliot. Plain and simple, he lets those 2 (!?!?!?!) breakaways in we have a tie game and a lot of unhappy pappies. (Note to reader: Can my writing be more irritating today? Read on to find out!) Something like his 9th straight start last night and looking sharper and sharper. At this rate let Leclaire recover on his hemorrhoid donut all the live long day, especially when you consider that we don’t need anymore bad juju on Saturday Night games. Let Leclaire start against Atlanta.

Sergio Gonchar. Check this guy’s point production on the year. Not bad.

Chris Campoli. The smart subtleties of his game are not lost on me. He is looking great out there.

Sens I would force to watch me perform the entire score of the H.M.S. Pinafore on youtube…

Zack Smith. For committing an ugly hit from behind. Love Z Smith’s grit but he could have really effed that guy up. Plus you’re basically signing a death warrant for one of our guys to be plowed in retaliation. (Two wrongs don’t make a right, Lisa.) Are those little stop signs they are putting on Timbits hockey players jerseys only there in vain?

Obviously, something, something pterodactyl the Islanders are pretty awful. Montreal will be a much harder test and will be riding a wave of confidence after defeating the Buffalo Toiletburgers tonight. But hey, just bring the heat boys. Bring that HEAT.