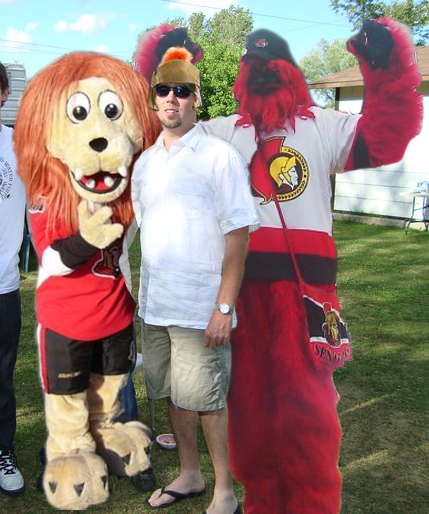 Last night was pure pleasure for Sens fans: we won on a Saturday night, we won in Montreal so we didn’t have to hear that fucking nananana chant, and we benefited from the steely, heartless assassin that is a motivated Kovalev. (Magnitogorsk Motikovalev is my favorite KHL team.) Karlsson and Gonchar are looking deadly out there on the points, Spezza and Phillips are both playing smart hockey, and the team has won five of the last six. Now we’re rolling.

To celebrate, today is The CCFR Annual Fan Appreciation BBQ, during which the Sens’ biggest super fan was honored for his undying homerism. His favorite player is Daniel Alfredsson, and he thinks Bryan Murray should win GM of the Year for the Gonchar signing. It’s actually pretty annoying how big of a fan he is. I love hockey, but get a life, man.