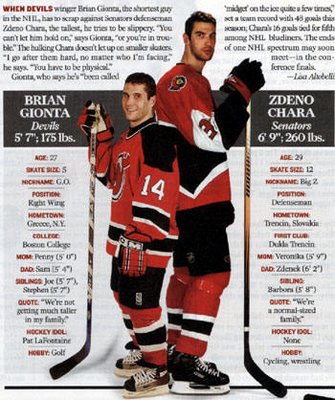 An almost random collection of observations on da game:

– That five minute penalty kill in the 2nd was inspired, possibly the best execution of a hockey system I’ve seen from this team. That it wasn’t immediately followed by a second five minute penalty, despite occurring in the second period, is a surprise.

– I detest Pierre McGuire, even if he does know what my major was in university

– Ottawa relies heavily on stretch passes, which almost never connect, whereas Jacques Martin teams move inexorably forward, like a battleship made up of little people, into the zone. Martin is boring, but again coaching a team to the top of the standings

– Most of Ottawa’s shots seem to come from nothing but the peripheries. In fact, the team seems so surprised to be in a position to actually be able to take a shot that it immediately does. Price can makes saves on shots from there all day long. Not only are Ottawa not getting many shots, the quality of shots are terrible. I don’t know how they simultaneously have the forwards so far ahead that they need to rely on stretch passes and yet doesn’t have the forecheck support to be driving the net, but there you go. Our boys are special. Worst of both worlds.

– Kuba looks really bad out there. Really, really bad. I don’t know if he’s still recovering, but he’s the tallest pylon on this team by far. And it was his brutal whiff on a shot at the blueline that lead to the two-on-one, Gionta’s goal, and this game going to bed

($3.7 million a year that guy makes. I give him two more weeks before we all stop using the fact that he broke both of his shoulders sneezing as an excuse)

– I don’t think it was fair to drop Butler from the first to fourth line after fifteen minutes of hockey, during which Ottawa only had one shot on net – meaning NO ONE was producing. Especially in favor of Foligno, even if he did score his second goal (on the power play). Butler got no ice time in the third at all, meaning this team called him up and scratched Peter Regin so they could have an extra person sitting on the bench. He ended up with about seven minutes of ice, less than Ryan freaking Shannon. Way to go, Clouston. That’ll solve the scoring problem

(Bobby Butler is the Dean McAmmond of my Vaclav Varada)

– I can’t take Christian Bale seriously in any movie. He just looks like Christian Bale dressed differently. He’s go no empathy in his face, just those dead eyes. Kind of like how Tom Hanks in a movie is just “Tom Hanks In Space” or “Tom Hanks On a Desert Island,” except instead of being affable, Bale looks like an escaped robot. Which is probably why the only movie anyone respects him for is American Psycho

– Where the hell is Mike Fisher? Why can he only score goals in twos? And when is he due to do that again?

(Been reading a lot about Nashville’s prospects lately)

– Karlsson really is out of control. He’s officially off the leash

(Pojkar will be Pojkar)

– Clouston’s in some real trouble here

I think its time we all admit that Montreal is a quality hockey club and Ottawa is not. There’s hope though. Remember that Montreal was basically assembled using a bunch of discount parts and only a couple of high priced guys. They could be a good role model for Ottawa at the close of this season.

While yes playoffs are still a possibility, are we ready to watch 4 or 5 games then lose interest for the rest of the spring? The real exciting time might be the hot stove discussions as free agency kicks into high gear.