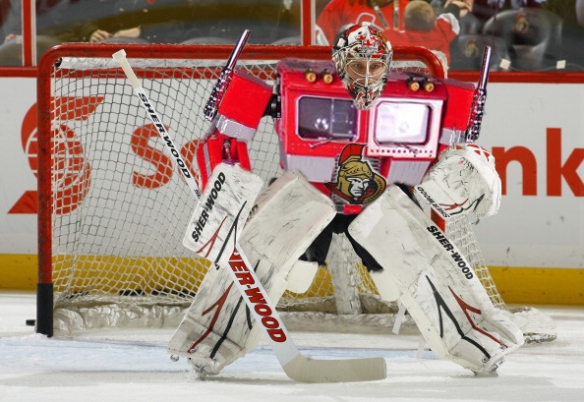 What the fuck was that? Seriously. SERIOUSLY!

That was a terrible effort and unbelievably we’ve seen this before (A couple of Saturday’s ago vs the leafs)  Lousy breakout passing. Giveaways, fancy plays that don’t pan out rather than making the simple, effective hockey plays. It was a nightmare. I think I’ve mentioned it before but the sens are on the precipice and need to pick a direction to fall. The more they sit back and tolerate shitty effort the more fans are going to turn their backs.

Even the Hockey Central guys on Sportsnet were stumped. Clouston is stuck coaching this dead team skating and Murray is pulling a weekend at Bernie’s. No one wants anything to do with this team, right when stewardship and front office energy is needed most. This is scary.

But there’s a reason for hope. So like any fan/idiot I am going to continue watching this team and hope that someone steps in with some idea of what to do. I think our young talent is over valued and if no deals are made before the deadline, Ottawa’s GM job is going to be significantly less attractive.

But hey, what other options do we have? This is our lot as sens fans right now. It’s like a hair-shirt.

The Sum of all Beers

“The fuck that was” for me was a 1.Spezza-less / 2. it’s clear this team was built wrong / 3. team that everyone except Karlsson knows their job is in danger and is playing like a shitpile…uhhh…pile of shit.

This already terrible explanation is tri-pronged:
Prong One: Injuries to KEY players. No first line centre, replacement centre was injured one game before and probably wasn’t magically better…against a team that had such a glut of centres that they were wondering how to dump MARC SAVARD when he was ready to come back so they could keep TYLER SEGUIN on the roster. “Oh Brother” – Something to do with Charlie’s Browns, 1871-2084)
Prong Duece: *employ a voice you would use to mock your younger sibling here* “Instead of being concerned with blocking shots, we want teams to block our shots” – Bryan Murray, Ottawa Senators GM and Welcome Wearoutter, Summer 2010. WOWWWWW teams are blocking the shit out of Ottawa’s shots alright. THEY ARE BLOCKING ALL OF THEM. Great plan, Ayatollah Bromenhi. This team has no fucking defensive defensemen and thanks to trading away a young, healthy centre FOR AN ALREADY INJURED GOALIE WHO IS CURRENTLY INJURED FROM INJURING HIMSELF REHABING AN INJURYYYYYYYYYYYYYYYYYYYY!!!!!!!!!!!!!!!!!!!! >:((((((((((((((((((((((( We have twenty eighth round pick Brian Elliot as our starterAGAIN. But you know, (previous) injuries happen. Fuck you also happens.

Prong Tré: Are the players whose jobs are in danger (everyone whos name doesn’t rhyme with Glerik Glarlssglug) trying to build their trade value right now? You think Kovalev’s going to come back trying to get Ottawa the best deal for him at the deadline? This team buys out more playazs’ contracts than Bad Boy Records’ Finance department. I mean…considering Kovalev was already apparently playing like a guy not ready to ready to retire but rather PLAY UNTIL HES FIFTY … where am I?  Is this a blog? Im talking about Prongs? Not Chris Pronger?……………………………………………………………………………………………………………………………

I ran into this E dealer on rollerblades named Conrad on the street last night and he described one of the SIX goals against (there were only two at that point BUT oddly/not funnilly enough I jokingly asked him ‘is it 6-0 yet?’ – I AM BARFSTRODAMUS! – anyway, he described that goal as a Boston player basically sashaying his way into the crease, shoving any Ottawa D right out of there and – sha lock lock boom (sic?)– goal goes in, backs are broken. That’s not OTTAWA…that’s not even NEW JERSEY. That’s how the team seems to be playing. I was once laid off a job (other than this one). . . but was told about a month and a half in advance that I was getting the axe (body spray farewell package). Well, after that shitty news you know I was showing up when I DAMN WELL felt like it, taking a however long lunch and a dump on whoever’s desk…anyway, that’s how the Senators seem to be playing right now…taking dumps on fans/season ticket holders desks/eyes because they probably don’t feel any pressure to fill any seats next season. Whats that? Were hosting the all star game next season? Oh that’s delicious.