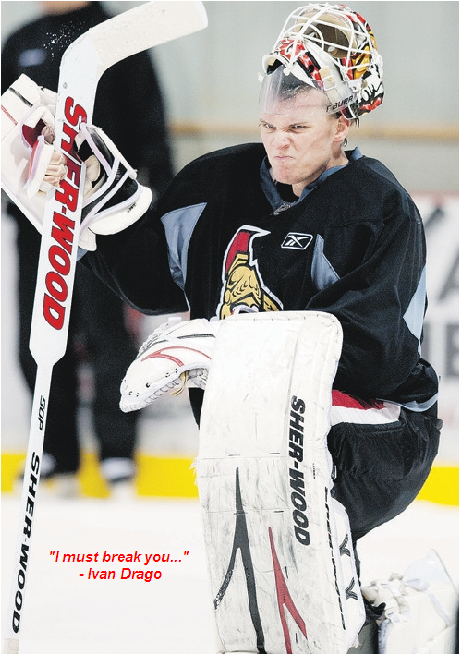 Conrad said:
So, discussion for the site: is it a good thing that Robin Lehener is ostensibly a psychopath? See attached photos, courtesy of Smooth Jimmy. Is this different from Ray Emery? We all thought it was awesome that Ray gave the team swagger and wouldn’t back down, and a season after giving him big money we ended up buying the guy out because he wasn’t team-oriented. Either Lehner is the same, i.e. taking a needless penalty that ends up giving the game away (I guess you could also argue it was Elliott giving up three goals on 12 shots that did that), or he’s somehow TOO team oriented. Dude wants to fucking WIN. I’m scared that with all of the losing going on around here that he’s going to rip a supermarket in half with his bare hands.

Marc P said:
I hope he rips Elliott and Kuba apart with his bare hands. Possibly use the Scandinavian Death Stare to turn Kovalev into a bubbling pile of stick handling turnovers.

This is different from the Ray Emery situation. Emery didn’t care about anything but himself (and white suits). Lehner is what this team needs. A goalie with skill and size who hates losing. The hit on the Isles 5th string goalie was a message to the team and the opposition. “Don’t f&%k with us and get the hell out of my way.” This is not swagger, this is a change in attitude. I personally loved it.
Re: the game winning goal – don’t blame Lehner for losing the game. Blame Clouston. Blame Clouston for putting Kuba on the ice when the team was down 2 men. I would rather have a tired Phillips on a 5 on 3 PK. Clouston also put Kuba on a 5 on 3 PK against the Wings the night before. Guess what? The Wings scored on that power play. The Masters of the Universe moral to this story: Orko is a better defenseman than Kuba and don’t let Kuba “work” the PK.
Ride Lehner for the remainder of the season and bench Elliott. The Franzen goal that Elliott let in while the Mule was coming off the wing was the last straw for me. I want to see Lehner snap this winless streak, and I also want to see him snap for real.
Peter said:
Lehner strikes me as the only reason to watch this team down the stretch.
Prianka said:
That first picture is amazing. What happened during practice to get him to make that face? If that is his reaction to something in practice, I can only imagine how he was towards Kuba after the Islanders game.

Speaking of the Islanders game, I didn’t even know it was on since apparently China fails at having free wifi but what happened?? I thought that was supposed to be our shot to snap the losing streak, maintain our pace of one win a month.

I like seeing Lehner between the pipes, because it is nice to see a guy on the ice who actually cares about what is happening with this team. The only thing that concerns me is how it will effect his attitude towards the organization. When he is playing the occasional game, it is exciting for him regardless of the outcome (well, close enough). If he starts playing losing games three times a week, we might find ourselves with a very dejected goalie on our hands by October of 2011.

I have invented a word to describe the Senators 2010/11 season – horrendless. It is a combination of the words horrendous and endless. Is it April yet? I’m ready to start watching playoff hockey.

Okay, so, that game against the Islanders could be the landmark moment of where a little theory of mine will finally get put to the test:

Conrad and I were discussing the Ottawa Senators goaltending whoas – NOW STAY WITH ME I KNOW THIS IS HARD TO BELIEVE BUT IT’S TRUE! I opined that I think to truly be a great goalie it is to your advantage to be a ruthless maniac. I think in terms of what could be considered fantastic goalies Martin Brodeur might be the only “Laid Back” great I can think of…but maybe that can be attributed to his making love this wife’s sister to take the edge off of playoff stress (thanks for the hot tip @seanavery!)

Tim Thomas: Best goaltender in the NHL today plays anything BUT tender *pelted with hot trash* ! Known as an extremely likeable everyman off the ice on the ice, Thomas is a WILD man on the ice. Should you search him on yootoobes youre just as likely to find him making a ridiculous sprawling save as you are a clip of him calmly and casually explaining to the back of a player who’s trying to crowd his crease’s legs/head “MY HOUSE… MY HOUSE.” Thomas is a great goaltender no question, rocking a sub 2.00GAA (!!!?) more than halfway through the season but he can also “th’ow them thangz” should anyone get up in his biz. I think it is an invaluable (who makes up these words?) dimension of his Vezina worthy play. Also, did anyone see that clip of him last week losing his mask mid play and getting up AND CONTINUING TO FACE SHOTS FROM PROFESSIONAL HOCKEY PLAYERS USING COMPOSITE STICKS? …bad ass, bad ass.

Roberto Luongo: Okay, so this guy isn’t the wildest guy ever but lemme just use a current Senator as an example of why I like Lou’s game:

When Pascal Leclaire came over here the big points of discussion were A) His supreme athleticism (go-go gadget DiPietro groin!) and B) His ability to not let a bad game bother him. He lets it sliiiiiiide off his back with a joke and a dfajkls;asdfldfa! Ha haaa! Siiiiigh, you know who doesn’t let a bad game roll off of his back? Luongo. His greasy tears in post game interviews after, granted, early playoff exists probably do little for disappointed Canucks fans BUT you know what they tell me? THIS GUY GIVES A SHIT AND ITS GOING TO BOTHER HIM ALL SUMMER. He has leadership skills. He shows that he thinks his bad play is unacceptable. Also, good at goaltending. When a goalie puts it on his back and says “I let the team down” after a playoff exit it makes ME want to cry because we’ve never really had a dude like that OOORRR HAVE WEEE… *see next exaaaaaaample*

Ray Emery: Razor, pronounced with a … okay, so, this dude was pretty frigging nuts. Not in Thomas or Luongo’s class play wise but definitely teams last good goalie..also interestingly the last Senators goalie who had ANY CONFINDENCE. I think his wildness on the ice was a huge part of his success in Ottawa. Personally, I think his dismissal from the team may have not have had to do with this so much as a little problem regarding …not to be confused with Kyle Wellwood’s nutrition problems and penchant for soft drinks…as in…uhhh…consuming a little too much coke (A COLA…COLA) after games. Anylawsuit,  his dismantelling of Martin Biron and immediately stepping up to the challenge of fighting Peters WHICH FOR A GOALIE IS LIKE FIGHTING AN ENFORCER WITH AN INFLATABLE SUMO SUIT ON…sent a message to constant playoff opponent / all the time rival Buffalo “we will bust you in the head, bust you up on the scoreboard AND upstairs” Intimidation IS a factor in the NHL (see also: Almost every western team is terrifying), I think we all miss the toughness he brought to the team…which was replaced with Martin Gerber looking like he just saw a guh-guh-guh-ghost in every postgame interview.

This guy is the total package of I cant touch the blue line/ talk to my goalposts lunacy. A lunacy that carries on to this day in the Q with the Remparts (great team name? GREAT team name). Known for being a cocky son of a bitch through his career…I am going to go out on a limb and piece together that his intensity and self confidence gave him the tools to win the Stanley Cup as a rookie AND not miss a game after HAVING HIS APPENDIX REMOVED and go on to win the Stanley cup AGAIN. Also, more general over the top intensity in Colorado losing it on various Red Wings tenders in brawls coupled with post game swagger

Clumsy Example:
“I don’t thinks I hurr what Jeremy saids, because I has my two Stanley Cups rings…pluggings my h’ear.” – Patrick Roy, Guy who says things.
“All your base are belong to us.” – Patrick Roy internet meme (probably).

These guys were also lunatics: Ed Belfore (see off the ice section on Wikipedia), Ron Hextall (really?), Tony Esposito (was so terrified of losing used throw up before every game and often between periods…and is in the Hall of Fame now,  Dominek Hasek(seems laid back but definitely tried to crush someone’s windpipe in a Czech ROLLER HOCKEY LEAGUE game). The list honestly…goes on…like this post.

Anyway, if we’re going to have the wimpiest defense corps ever (see also; Johan Franzen scoring FIVE GOALS with one arm) I am happy to see a little stick smashing after a loss. Welcome aboard Robin, I embrace your young cockiness and hope you find a place among our other recent cocky young addition, Erik Karlsson..our best defenseman…oh wait, whats that? Oh we have Sergei Gonchar on the team too…but…oh…but…he’s doing better than that guy? Oh he is? I see. I think I’ll take the afternoon off.

LASTLY, fine folks, does Toronto have the makings of a Dany Heatley type situation on their hands? Youch!

What do you think about all this Robin? 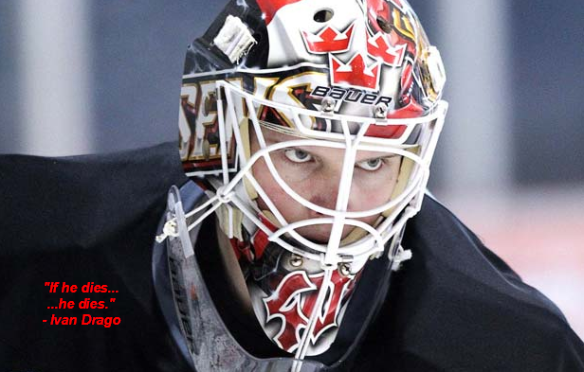