James
Funny Thing:
When they were talking about how they are going to need to replace Fisher on
the banners (hubris even having so many of those btw) outside of scotiabank place…holy shit i realized…once this fire sale is over they are going to have to put SOMEONE on those banners….and obviously its going to be
KARLSSON. Im not just saying this bc im a fan boy…well primarily…but…HAVE YOU SEEN how that guy does
studio photos? he slicks his hair back all weird and gets this weird ass smirk going…its gunna be amazing..
something to look forward to for 2011-2012. Scroll down for the evolution!
A smirk is born: 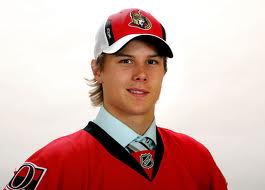 obviously i hope its this that they go with …