Anderson’s new mask (Due credit: the Anderson mask was originally posted by the Goalie Guild. Also in fairness, the artist has asked the Goalie Guild to take the mask down until he can fix the logo on the side so that it’s the current one.) 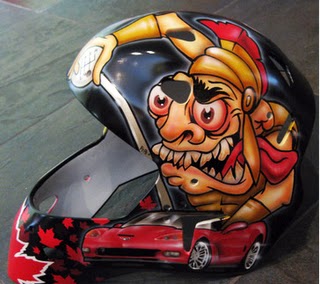 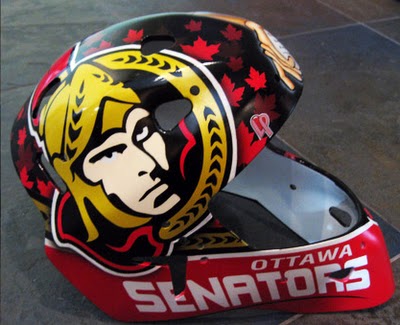 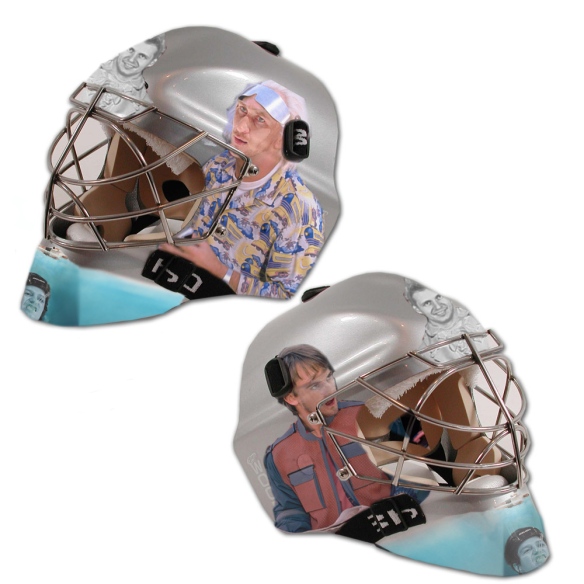 when are they finally just going to cave and admit they are wrong, give the people what theve been demanding and let Steven design the goalie masks? What a pile of dog garbage. You know masks are in a sad state when Jonas Hiller has the nicest mask because its black with a matte finish

That’s a joke right? I wouldn’t sign him with a mask like that.  That’s embarrassing.  It’s going to take a lot of 50 save nights to down play that garbage dump.

Oh man, that is brutal. Especially the afterthought car on the bottom. And the OLD LOGO… I prefer the repurposed Sasquatch with a Sens sticker on the chin that he’s been rolling with. Hopefully he tunes this up for next season. When he re-signs in Colorado.

This is a good discussion though: best Sens goalie masks. There have been a ton of bad ones. Martin (?) the Martian on Lalime, Hasek’s Goth Senator on the dome.

Personal favorites are Martin Prusek’s columns, and I guess Gerber’s Darth Gerber mask gets points for picking up on a fan meme, though having all black was way cooler than going literal. I was also a fan of Ray Emery’s boxer mask (more so than the weird, tan pupa thing he ended with)

I second Steve being in charge here. Steve, what would you do? I vote for Kovalev / Foligno Back to the Future 2.

I actually really liked Lalime’s Marvin the Martian mask back in the day, and always thought it was a little strange that Emery had Mike Tyson on the side of his mask. Tyson is a rather strange person to openly admit to idolizing, all things considered.

Anderson’s mask is downright ugly, and what is the deal with the massive stick shift? (I know, I know, I am practically setting someone up with that one). I’m curious about his decision to use the wrong logo, was it a conscientious comment on the fact that the logos keep getting uglier, or is this is favourite one? If it had been me, I would have gone back all the way to the old sharp featured Senator that was shown in profile,

Conrad youre really pessimistic about this whole Anderson situation ive noticed. Unless youre joking …im not made of knowing things (clearly).

Prusek clear winner creativity wise but that helmet itself was so dumb looking, it was like Hasek helmet meets Bruce McCulloch

as that cabbage head character for toddlers.

It’s not that I don’t like Anderson. I think he’s the kind of goaltender that Ottawa could use – plays well, is cheap, character guy. Will probably play better splitting games with Lehner than playing 81 games in a season and facing 50 shots a game like in Colorado. I’ve been in his corner ever since he was in Florida, filled in for a month or two for an injured Vokoun, and I picked him up in my pool. I made sure to pick him up the next year. That season he was in the Vezina conversation, and to be able to pick up a guy like that for around the $2M he’ll cost (though who knows…maybe there will be a market for him this off season and his salary goes higher) would be a coup.

Having said that, I just don’t know why he would re-sign here. He could go anywhere. He could sign in Washington and play for the Cup. Or Chicago, or Philly. There are plenty of amazing teams looking for a goalie project. Why sign on for a rebuild, with no GM in place, in a high pressure market, in a small Canadian city? Maybe it’s worth the risk to get to know him and offer a contract, because after all, all we gave up was a 7th round goalie who had played himself out of a job. But if he walks this summer, and Elliott could have maybe gotten a pick instead, I just think that would have made more sense. Not a huge big deal, but I’m resisting the urge to swoon like the blogs and the media are doing. I don’t want to get attached. I think he waits until July 1st to see what offers he gets. Though with the CBA expiring, maybe he signs short term in Ottawa for the stability. I’m reserving judgement.

As for the mask, I don’t understand who actually gets contracted to do these things. I can’t get a newsletter made at my work without it going through my comms department to make sure the branding and messaging is consistent, how can a goalie for a pro sports franchise accidentally get the old logo on his mask? There have got to be hundreds of freelance artists and designers in this city who could come up with cooler designs than that.

Here’s my thoughts Anderson.  Go the Hiller route to the end of the season.  Obviously the Senators are going to have a new look for the 3rd jersey next year (Please Uncle Melnyk).  If you are signed for next season, as I assume you will.  GO WITH THAT LOOK.  It would be a great idea to be the new face of the Senators re-build, and ABSOLUTELY NO SENA-GOTH.  That’s collectively let that Logo DIE.

Also you have to give bonus points to Robin Lehner for incorporating the SNES logo into his mask and it still looks great.

Agree with Steven. I was just looking at a picture of a buddy on Facebook meeting Alfie taken in 2010 and he’s wearing the Senagoth in the picture and i was almost like HOW DARE YOU PRESENT TO HIS HOLINESS IN THAT MESS! Instead i think just ate dinner..

Im with Prianka also in that with the Side Profile Senator (who we call SPS around here)…you dont know what you got till it’s gone, eh?

Conrad, some optimism on the Anderson front apparently Jimmy Howard signing for so little* reaaaaaally changed the game on how much Craig Anderson is projected to earn next year….it will be a small miracle to see CA get 3M now that Howard, who has way more upside, just signed for something like 2.2M…Idea: can we just kidnap Ken Holland (you know the locks are broken at the Joe) put a bag over his head and while he is en route to Ottawa just paint and redecorate all of the offices and insides of Scotia Bank Place to look like its Joe Louis Arena so he can manage the Sens without knowing it?  I guess that could make Andy more attractive to other teams though 😦

Anyway, you make a really good point. It’s prudent not to get excited about him sticking around (note: One of the most boring things about the rebuild so far is not being allowed to get excited about anything…except losing?) but all indications are that it’s a top priority of Murray to get him locked down by the end of the season, if that means anything. I think it would be wise to get him, because…the team will need a goaltender that can get into an R rated movie and isn’t made of macaroni glued to construction paper. Maybe they sell him on this rebuild having a very fast turnaround of which he is a cornerstone and will subsequently see the benefits of? Hard to say what Anderson is worth considering he was having a Brian Elliotesque season up to the trade….for Brian Elliot…Colorado trading you for a dude who is literally the new Dan Cloutier has got to lower your value even IF one has hoisted the Sens to .500 in the week since arriving. Teen Jesus, how do the Capitals have the cap space to do anything? Ovechkin, Greene, Semin, Laich, Backstrom..other dudes…ugh…fuck other teams.

*by little I mean, money i could live off of for the rest of my pathetic life

My idea for mask artwork would be to plaster the entire thing with a collage of visages of former Sens goalies. Gerber, Sidorkiwicz, Beaupre, Hurme! Of course it would end up looking like a promotional still for country super-group Alabama. But hey, in a city devoid of artistic merit (well lacking merit easily represented on a contoured surface with a giant hole in the middle) we could do worse.

If Anderson wants to stick around he should probably do some research. It’s like going to a job interview and having no background info on the organization you desperately want to work for. It’d be kinda cool to do a retro, log driving thing i guess (Doesn’t Luongo have that going on?). I dunno, I’m not an artist. Famous album covers repurposed? Just spitballing here.

﻿﻿﻿I absolutely do not have a problem with goalies getting masks that have pictures of their teammates on them. I’m surprised it’s never happened. If I were a goalie for Ottawa, I’d get a picture of Big Hair Alfie.