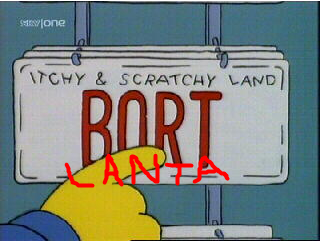 Tonight our beloved Senators (still okay to belove them during the rebuild? Get at me about that) take on the sometimes really good sometimes not so good Thrasherz of Hotlantapeg.

Let’s get straight to the X factors* of this game!

For Atlantis: I saw highlights on TSN of the game the other night twixt the Thrashers and the Canadiens and HOT MESS the one hundred section wasn’t even a quarter full. I am not kidding. Note to Atlanta Ushers: move all the people in the building to where to camera can see – this includes vendors – hell, fill a seat yourself. Also another  Tip:  Shoot the game with video cameras that were made in the last 30 years.
There is a real possibility of the Thrashers being distracted by people actually watching them perform the iced hockeys. So, fans at the game be loud and proud and try to out cheer all the Thrashers fans that infiltrate the arena. What else?…Oh, Dustin Byfuglien (pronounced By-Fug-Lee-Ehn) is currently challenging Metro Detroitland Area octogenarian Knickerbocker “Nic” Lidstrom for the Norris trophy…so I don’t know? Gelp when Atlanta gets a power play or 10?

For HOTTawa (we’re Canada’s HOTlanta….you know…minus the Hot…part): Two words: Craig “Greg” Anderson! These stats speak themselves six goals in five games. Pretty good numeros for a goaltender wearing an Ottawa Senators jersey. Now…
X factor 2, should ‘Andy’ (copyright, CCFR) stand on his ugly new mask, can the Sens score one goal? Jus’ playin yall. I find it was really hyped how the Sens were shut out 1-0 last game but I think the Bearenstein Borin’s are a bit of a special case – You guys snore your way to a cup New Jersey style! – If the Thrash (copyright, CCFR) play anywhere near how I think they do (note: I honestly find it painful to know anything about this team…) the Sens should be able to open it up a bit and score on whoever their goalie is – what im like Bob Cole I just call them “The Goalie” also like Bob Cole I am TERRIBLE at covering hockey. If Bobby Butler scores tonight (during the game, pervs) … I will take your advice and throw myself in blogger jail (which is a real thing) FOREVER!

Larsen Lottomax Update: An Oilers win and a Sens loss puts the Senators in dead last in the NHL which I am still adjusting to feeling good about.