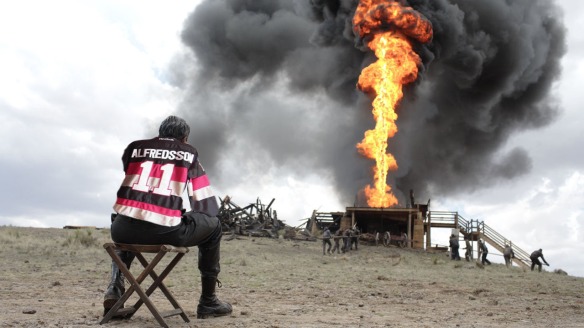 I'm Daniel Alfredsview and this is my son H.W. Karlsson.

Happy Thursday to all you grizzled 1870s prospectors out there,

Another glamorous day finds us gathered here to have a brief, friendly chat about Game 2 of Ottawa’s 38 game road trip to the majestic west .Breathe that West Edmonton Mall air. Ahhhhhhhh. One thing I was thinking about toward the end of Tuesday’s rumpus session against the Flambés was that I hoped they’d get rested up because they did a hell of a lot of skating in that game. That first period alone was a sprintfest. The youthful Oilers are not going to roll over at home either especially when looking to end a 3 game losing skid. With both teams desperate to win, albeit for different reasons, I think we could see a pretty great game.Colon and parenthesis to indicate happy face.

Persons of Interest:
Coming off his breakout starring role in the films “FUBAR” and “FUBAR 2” Ryan Smyth looks to “continue to keep on givin’r.” For a 35 year old who has been cross checked in the lower back around 5 billion times  Smyth looks rejuvenated out there and is on pace for a career year. Hopefully Phillips/Whoever can keep him out of the crease. Yadda yadda yadda Elberle/Hall/Creamy Nouget-Hopkins line stuff…those kids are good. Yikes. Obviously, watch out for those guys.
Of note: Alesh Hemsky is currently between injuries and looks to be a very good hockey player who isn’t injured tonight. Speaking of injuries, keep your head up Stephane DaCosta as Andy Sutton’s elbow is at the exact height of where your nose is so…beeee carefulllllll. Magnus Ppaajjaarrvvii has one assist on the season and looks to take over being Bobby Butler while Bobby Butler looks carry on with his role as the new-old Bobby Butler. Its like a roller coaster of emotions up in here. Come on powerplay light my fire tonight! Person I’d LOVE to see score tonight: Jessie “Brad” Winchester. Ugh, gotta feel for that guy after hitting the post IN CLOSE on an open net. I will also settle, however, for any of the other Ottawa players scoring as well.

Battle of the Guys Who Enjoy Fast Motor Vehicles (some get caught driving them drunker than others… I’m obviously talking about the guy painted on Anderson’s Mask):
After a…let’s just call it an off season uhh, spent…at adult sleep away camp, badass name haver Nikolai Khabibulin has had an age defying, lights out start to the season. He’s been especially impressive given the so-so defensive corps he plays behind. Khabs (?) has a 4.00GAA in his last 2 and is looking to get his groove back with a big bounce back win.
Craig Anderson already had his bounce back game two games ago and looks to continue to bounce like a ball over lyrics on the karaoke screen of life. I know when Andy was signed it was talked about that he’s a goalie that likes to play a lot of consecutive games which is, you know,  nice but you could tell the guy was just burnt out in that loss to Buffalo. I hope that is not the case here as he will no doubt face a lot of rubber tonight and the Canucks are just around the corner so, just sayin’ – You guys, im a little worried about THAT game.

Does anyone else think after that Flames game that Colin Greening looks pretty damn injured right now…rest him up! Put Filatov in there while he —– SOUND OF RECORD SCREECHING Party goes silent

I have a competition in me…unlike some people:
Hey girl, you hear from around the way about this whole Filatov mess?
GIRRRL, in a post-Yashin, post-Heatley paradigm, if Filatov wants to go back to Russia, honestly, get the fridge out. In fairness, if he just feels like it has been a rough go that past few years and this making the NHL thing isn’t going to work out and he wants to go play in (arguably) the world’s 3rd best pro league that’s fine. On the other hand, if he is the enfant terrible he is repeatedly made out to be in the press (and by Columbus’ people), and wants to pack it in after not even two months just because? Take my business class cannon across the Atlantic. DarrenM over at Silverseven had a great article about how Filatov should take a page, AS WE ALL SHOULD, from the Book of Dogman. I agree with Darren but Dogman, for me, story-wise is a little bit more of a long shot that stuck with it and is finally seeing results. Maybe Filatov could learn a little something from Our Special Little Guy. Remember when high-pedigree Karlsson got reassigned to the AHL? Reports were* that Karlsson, still on a two-way entry deal btw, was so upset with his demotion that he shed tears in Bryan Murray’s office. So what did our Special Little Guy do? The guy I doubted would even make the NHL? He went down to Bingo, wore that ridiculous uniform, put up an undeniable point a game earned his call up and this February will play in his second all star game** in as many seasons. Has Filatov been given a decent shot? No, not yet, but if the kid cant handle working his ass off for a call up after a couple months, put him on a submarine back home. If we expect a team of youngsters to make the playoffs in a couple seasons, this is not the kind of mettle you want to see on the squad if that’s the plan. In all, I hope this whole situation works out for the best for all parties. It’s still early even as far as distracting controversies go.

Sportsnet Sens is broadcasting the game so enjoy not seeing it/ streaming it, everyone who isn’t a bar that gets every single channel on Earth!

*Cited elsewhere on the internet and in my memory