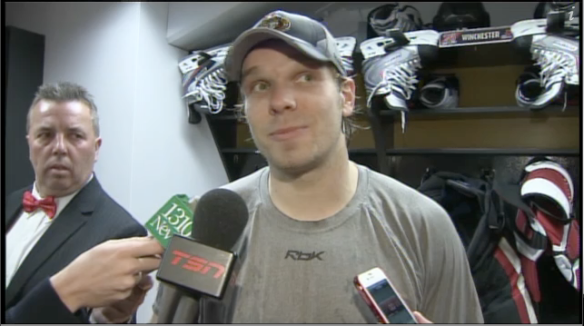 How many posts can I begin remarking at what a whirl of wind it has been? Let me count the… HEYYYYY!
So end of the year, right step cousins? It has been nothing short of a … let me just get out my Whimsy Thesaurus … Okay according to this, it has been nothing short of a “weather phenomenon in which a vortex of wind (a vertically oriented rotating column of air if you want to be a complete dick about it) that formed due to instabilities and turbulence created by heating and flow (current, doi oi) gradients” hmm. Looks like I mixed up my Whimsy Thesaurus with a Dictionary of Meteorological Terminology, AGAIN! Anyway, I wanted to take some time to talk about some things I am happy about as the year 2011 comes to a close. It is important to give thanks ‘fore the End Times

Rebuild: A Spike Murray Joint
Former Minister of Fisheries and Oceans, Beetlejuice once said, “Life is so much less stressful when you’re dead.” I find this especially true when you consider it in relation to your hopes of your favorite hockey team’s playoff competitiveness.

Ahhh, seriously, I always wondered how fans endured rebuilds and hence abhorred the prospect of one. So far, it’s actually not been all that bad because I’ve learned that when the team does terribly they are just fulfilling the “there’s going to be a lot of long nights” end of the bargain and conversely when they hand a more established team their breakfast they are merely “showing flashes of the future/surpassing expectations.” That’s a pretty good deal, even when you lose you win at losing to win!

Hold up though, its not that simple. I understand that Byran Murray’s unique brand of rebuilding appears (though far from over) to be much, much less painful than what fans of other franchises have had to endure. It’s tough to look at the successes enjoyed by the 1st overall pick laden rebuilds of  franchises like Chicago and Pittsburgh and not be a bit jealous. That is easy of course when you forget how long those teams were TERRRRRRRIBLE for (and how awesome the Senators were year in and year out back then). Pittsburgh also came within a hair’s breath of losing their team. That’s a gamble this fan is not willing to make since 1. We’ve been there already –heyyyyy NOT fun! 2. We don’t have a Super Mario to swing in and save the day 3. Already working with the disadvantage of having a medium sized municipal sports culture already divided up among Sens fans and the TOTALLY reasonably entitled leaves and habs fans (now featuring delusion on a chanting nah nah nah hey hey hey goodbye while sitting in 13th place – 25th overall – level!). I like the way Murray’s been doing it. Elite we ain’t yet still fun to buy tickets to games!

With some fearless trading of a bucket of assets for picks, savvy drafting, some deft moves like signing college FAs and the seemingly overnight building of an AHL champion farm club (which was quickly harvested by the Sens as a result) the team is already looking pretty respectable. Damn! That’s not even counting Lehner, Zibanejad, Silferberg, Puempel, Noessen, Da Costa, Weircioch, Stone, Borowiecki, Gryba, Prince, Pageau, infinity waiting in the wings.  Pretty cool. Maybe it’s because I am an Ottawa fan and I fear the pinning of both hopes AND dreams on a cant miss no.1 pick but I believe this method of rebuilding  is both faster and involves less risk. One need not look past Long Island to see how perennial basement dwelling can in some cases …well, be just that. Get Well Soon, Rick DiPietro’s Contract! Even the Oilers, who have a seriously exciting young team, look far from rebuilt as they currently sit below the recently dissed Montreal Anglophiles (see above) in the standings and have a defense lead by Andy Sutton WHO WILL BE 37 IN A COUPLE OF MONTHS…and is currently suspended, and the SOMEHOW EVEN OLDER Nick Khabibulin…who played for the original Winnipeg Jets in net. There’s definitely hope in Edmonton but damn those are some patient fans.

Not Rushing Mika Zibanejad
Speaking of rebuild (basically what this entire post is about), this kid is looking very promising. I think that the advantage of the rebuild still being in its infancy is that that it allows for the Sens brass to not feel compelled to throw the fans a hopes and dreams bone which givea this 18 year old(!) more time to develop his game in the background. I suppose as of right now Mikachu is the crown jewel of the rebuild and it shows patience on the organization’s part to take their time with him. That trade for Turris gives Zibanejad additional padding. We’ve had glimpses of what Zibanejad is capable of but if you consider for a moment that in the year 2015 he will be 22 years old…let the kid continue to put Swedish men on their asses for a minute.

“Core Players” Really Pulling Their Weight
Special Little Guy included in this mix. What? He’s in his 3rd year…and in second place in scoring on the team. One of my favorite things about last season’s fire sale was that Murray dealt some very valuable players along with Alex Kovalev but somehow did not sell the farm in the process. It seems after years of (sometimes understandable) frustration, the majority of the fan base has overcome their constant calls to trade Jason Spezza and I for one could not be more thankful about it. I think a lot of this turnover (see what I did there) has to do with Spezza himself. I think he spent his early NHL career on Pizza street, one of my favorite streets, and the last few years have taught him that that success in the NHL isn’t all ham, plaques, finding Dan(n)y Heatley waving his stick in the air and letting Papa Alfie clean up everything else. To Spezza’s credit the last few seasons, he has stepped up his already impressive game. Yes, when a the Sens are down by a couple and the opposition is trapping up the neutral zone, yes, he still tries to turn his stick into Gumby and dance around everyone on the ice but how much shit can we really talk about the guy we can always  count on to lead the team in scoring and make his line mates better players and BETTER PEOPLE…(what?) Moving on, I think its fair to say that we got those bounce back years we were looking for from guys like Gonchar after a shaky start, Phillips who is rocking an even +/- instead of -35479834, Alfie who lest we forget is 39 years old, Neal who is quietly having an awesome vintage style year, and perhaps most surprising of all Milan Michalek who despite missing time due to a concussion is still in the NHLs goal scoring elite AKA The No Heatleys Club 🙂
Even as hot and cold and luke warm as Anderson has been at least we see him as our undisputed starter (due in part to Alex Auld as alternative) he has so far taken any pressure off of calling up Lehner while he uhh..learns the uhhh true meaning of getting pelted in Binghamton. Thanks to the very solid play of many of these vets who Murray kept around, come all star game time (#votekuba!) they’ll hopefully be some Ottawa Senators players in the game based on merit! Yes, merit and not the stupid, stupid fan voting system that defeats the purpose of a game that costs HUNDREDS OF DOLLARS to attend so you can see James fucking Reimer start in net against the ghost of Sidney Crosby.

Bobby Butler Has Not Delivered and Its Not the Biggest Deal In the World
As anyone who skims …I mean reads this blog IN FULL on a regular basis knows, one of my favorite things to harp on is how much last season stunk to watch. My favorite flash point being Spezza’s month on IR that saw the team win one game. Truly it was a season lacking in bright spots. One of the few bright spots was the emergence of Robert “Bobby Bee Bop Beantown” Butlah. Sure he was getting most of his points playing on the top line with Spezza but if the 2010-11 season taught us anything, playing on the top line didn’t mean you were going to get points. He also showed some individual panache with his Mark Messier style top cheese goal against Atlanta (Rest In Winnipeg) and his knack for just throwing whatever on net, sometimes with sexy results!

I like I’m assuming many others was bolstered in both fandom and expectations of BB with his Calder Cup championship and new one way contract with the big club. So, yeah, here we are, a few hours from what will be our last year as a planet and Butler is situated snuggly below Jared Cowan for goals scored. To that you might say, but James that’s not fair, Cowan is a top pairing defenseman and Butler a lowly bottom six dude! I respond thusly, in the summer, he looked all but cemented in the top 6 and there was talk of 20+ goal seasons. He’s been given opportunities and kind of blown a lot of them. We were, many of us, ready to put all of our eggs in the Bobby Basket. Wow, this dude has been a disappointment. Though, its hardly been much of a sting, hasn’t it?

Well, we have had the luxury of seeing fellow Bingonites such as Erik Condra, Colin Greening, and oy vey wow Zack Smith firmly step up in his absence. Not to mention improved seasons from vet forwards Chris Neil and Nick Foligno. This of course goes without saying that I hope that Bobby B turns his season around and racks up a bunch of points but I am thankful that our secondary scoring hasn’t suffered with his production lacking. Paul MacLean giving players not named Nikita Filatov a chance to excel when they look ‘on’ has, I believe, made this a much more well rounded team than previous iterations.

Learning What REAL Fan Optimism Is
Seeing as I am basically the guy with the fdfjhrgbvfdfv coloured glasses on this blog, I tend to look on the bright side of things. After a pretty rough start and pleasantly surprising past few months I can see that the future ACTUALLY looks pretty damn good for the Sens. The current team is competing and the cupboards are stocked. That is a lot more substantial than saying maybe Cheechoo and Kovalev can replace Heatley’s production! Or maybe Mike Fisher will finally AND magically be 3 times as good this year! We have spent a few years in the weeds watching the Sens navigate through a younger, faster NHL riding on a skeleton of the beloved cup final roster. Those days are over and done with. The reset button has been pushed and the surprising news is that it is already clear that this was right move.
MAYAN APOCALYPSE HERE WE COME!