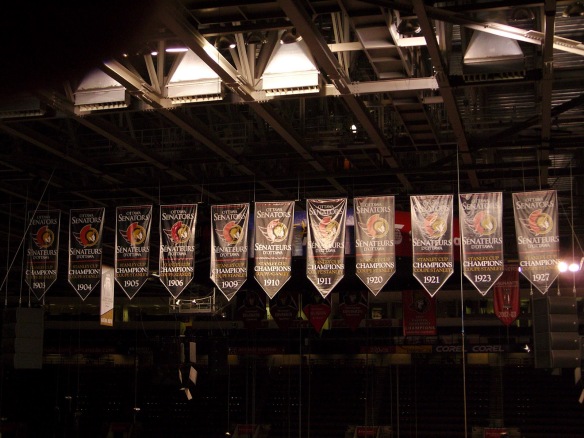 Like most teams in a league that has taken huge strides to ensure parity, Ottawa finds themselves in that creamy, mediocre middle band. Not elite, not terrible; capable of making the playoffs one year, but always feeling like they’re one or two key injuries or Craig Anderson becoming human away from sinking below the magical 8th seed cut-off. Expectations are a tricky thing; right now, while most of us armchair pundits would be disappointed but not crushed to find the team outside the playoff picture, and while rookies are just that, there’s a wide, forgiving berth.

It’s easy to lose sight of how optimal Ottawa’s situation is right now. A few key veterans—Spezza, Michalek, Anderson, and I suppose Karlsson is about a season away from not being considered a newbie anymore—are in their prime. A few older guys—Alfredsson, Phillips, Gonchar—provide the mustard and stories about how Springfield and Shelbyville once fought over a lemon tree. And an ocean of young talent with fresh faces and nebulous ceilings enjoy playing PSP on the plane. While Ottawa’s window to contend is certainly not open, its window to be a playoff competitor is. It’s an exciting team to watch.

The next season or two is going to be when the rebuild is really put to the test. Alfredsson and Gonchar are on their way out. Michalek will have one year left on his deal (and one that pays him $6MM) after this season, and Spezza two. Both of them will find themselves entering declining territory as they hit their 30s, and hard questions will have to be asked about their role on the team and what kind of contracts they should receive. Phillips is on a similar timeline, with it looking likely that he might be squeezed out by emerging talent on the back end. If the Zibanejads, Silfverbergs, Stones, and Lehners don’t pan out, or if this team doesn’t commit to a big purchase on the free agent market, the team could find itself settling for the next half-dozen years into that creamy middle: not quite elite, not quite terrible.

That’s why it sometimes pays to go with quantity during a rebuild, and why the organization’s decision to go with less pain in the short term might keep the team from becoming a true contender in the long term. Only time will tell of course.

The big question, for me, is whether the team decides to continue to build internally or to make that big trade. When we saw Ottawa deep in talks with Columbus last year, the rumor was they were willing to part with blue chip forward and goalie prospects, a first round pick, and a roster player for an aging and expensive Rick Nash. That should be worrisome, but unsurprising to fans. I’ve written on this blog before that I don’t think this management has the appetite for a true rebuild, and half-measures and Hail Marys might take the place of slow, methodical building.

There’s still lots of time to see where Ottawa’s prospects end up. Silfverberg and Stone both kind of came out of nowhere, projected to either be lower pairing players or not play in the NHL at all, and these long-bomb successes would make one or more of the team’s higher end prospects not working out easier to take. But without the incredibly deep pools that teams like St. Louis, Los Angeles, and Washington enjoyed when they launched their rebuilds, Ottawa is going to have to make contact more often than not, and really hit it out of the park in free agency, if it’s going to add to those banners above.