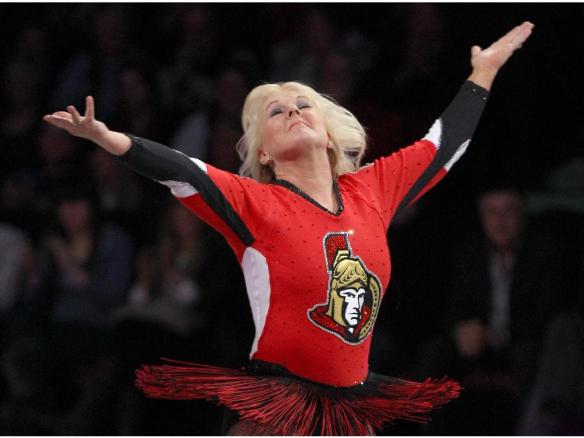 Me, balling so hard (not pictured: you, getting shook about it)

The Flames, much like the city of Calgary itself, are the least sexy thing on the planet. Their red-and-yellow, flamey uniforms have always looked like dollar-store knockoff Hot Wheels cars. Their roster every year just seems like a slightly different collection of generic, round-faced white guys (yes, even for the NHL) resembling a lineup from the NES version of RBI Baseball. They play in an arena modelled after the world’s largest Pringle, in front of people who are covered in rhinestones and full of undigested red meat. Beef: it’s what’s for dinner.

Calgary is one of those teams that the stats crowd will tell you was significantly outpossessed last year and was lucky to make the playoffs, which is exactly the kind of talking point I like to seize upon when it’s not about the Ottawa Senators. I really have nothing else to say about the Flames, because this is already the most I’ve ever thought about them. Suffice it to say the Flames have a couple decent young forwards, their captain is a Norris trophy candidate, and their fans live and die over their marginalia because there are no other pro sports in town, or really any activities at all. In this way, they have nothing in common with the Senators, and you should hate them.

PREDICTION: Wednesday will be the Flames’ third east coast game in four days, whereas the Senators will have had four days off to think about last week’s improbable, impossible loss to the Arizona Coyotes. Even the guy in the little lottery kiosk at one of the Sad Malls, like Merivale or Hazeldean, will refuse to sell you a Pro Line ticket taking the Flames in this game. He hasn’t spoken to anything other than a fish tank in four years but he’ll still call you an idiot. Look for Erik Karlsson to score 189 goals, each more elaborate than the last. Senators 5, Flames 0.

This is probably where you assume I am going to EVISCERATE the Detroit Red Wings for beguiling the Ottawa Senators’ long-time captain like a cathouse of painted Swedes, dangling Cup Promises and lingonberry pancakes in front of him as they spread their shin pads like a well-oiled bear trap. Well that’s an extremely unpleasant image, first of all, and second, I’m not going to do that, because this column is all about defying expectations. This column is the Sopranos finale of hating.

The truth is, *sits you down gently*, people get divorced for all kinds of reasons, and none of them are your fault. Besides, leaving your career team at the age of 40 is basically like ending a marriage in your 60s – getting out at that point is pretty much about principle, not market value. So let’s not keep dwelling on Daniel Alfredsson – WHO CAME BACK, BY THE BY – but rather the Detroit Red Wings, a.k.a. the Montreal Canadiens who still occasionally win championships. The Red Wings have so much laundry hanging from their rafters you’d think their dryer was broken. Their owner is the beloved Mike Ilitch, an 86-year-old entrepreneur and philanthropist who made his fortune founding the Little Caesars pizza chain. Ilitch has done great work investing in and revitalizing the city of Detroit during its recent hard times, but is also the man responsible for marketing bacon-wrapped deep dish pizza. In this way he probably killed more people this year than polio.

The Red Wings are the kind of team that does things “the right way” and have made the playoffs every season for the last 1000 years, which also happens to be the average age of the players on their roster. Watching their steady, consistent execution is a lot like watching a hockey fundamentals DVD, and about as entertaining. Some Wings fans may be wondering if their playoff streak is in jeopardy now that their long-time coach has departed for the Leafs. This is like asking if someone can continue to be a B- student after their dad runs away to becomes a carny. I was fine, by the way.

PREDICTION: The Senators and Red Wings are playing a home-and-home series on back-to-back nights, which means you can watch the Senators win Friday in Detroit and then go to your Hallowe’en party on Saturday confident you’ll be missing a repeat, not a new episode. Look for Andrew Hammond to get off the schneid with a shutout in one of these games, and for 15,000 Red Wings fans to sigh quietly in a Denny’s at some point. Also, your Hallowe’en costume is more than a little racist. It’s not just me saying that, either. Senators 5, Red Wings 0 (both games).

Next week: the Habs are back, making vaccinating your children more important than ever.