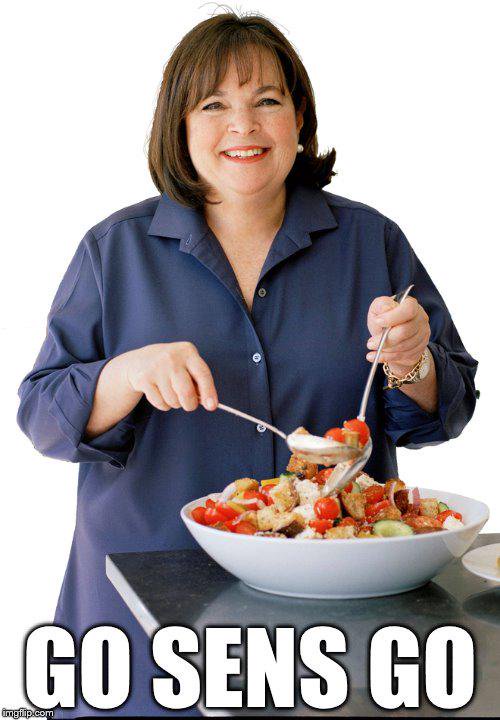 Me, the peak of casual elegance (not pictured: you, eating a pizza bagel)

It’s hard to believe this is only the second game of the year against the Sabres. For Senators fans, playing Buffalo is one of those run-of-the-mill events that feels like it should be weekly, like doing laundry or quietly ignoring a racist statement made by an elderly relative. But so far this year the Sabres have been conspicuously absent from the Senators’ schedule, and if not having them in your life regularly means you haven’t been paying attention to recent goings-on in Buffalo – fewest good bands of any Rust Belt city, BTW – don’t forget that Tim Murray tanked so hard last year he should have changed his name to Rommel, then picked up Evander Kane, Ryan O’Reilly, and Jack Eichel, and still finds himself at the bottom of the Atlantic Division entering this game. It’s enough to inspire a maudlin ballad by the greatest band to ever come out of Buffalo, uh . . . the Goo Goo Dolls. Yowza.

Not only is this only the second Sabres game of the year for the Senators, it’s only the fourth game of the year, period, for Sabres goalie Robin Lehner, assuming you don’t count the 27 minutes he played in the opener against the Senators before he planted about 255 pounds of post-concussion weight the wrong way on his ankle and sprained it all to hell. Goaltenders rarely rely on their ankles though, right? This season may end up being yet another writeoff for Lehner, who’s already 0-3 and will likely find it even more difficult to get back into full NHL shape this late in the season (Chris Phillips comeback still totally happening though). Expect the reality of this situation to sink in around the time a broken showerhead blasts him with ice-cold water in the Canadian Tire Centre visitor’s locker room after the game.

PREDICTION: A lot will be made about Lehner’s return to Ottawa, but let’s not forget Tuesday’s game will be an emotional homecoming for another ex-Senator, human police sketch David Legwand. Sure, Legs only played about 7% of his career with Ottawa, but he also only has half a season under his belt with Buffalo, so the Sabres celebrating his 1100th game last week feels a bit like if Canada took credit for the Eagles because they once played a show in Calgary in 1972. Enough, Canada. Look for Legwand to play eight minutes in this game. Senators 5, Sabres 0.

BONUS PREDICTION: Believe it or not, some people find the idea of voting for John Scott to play in an exhibition hockey game more objectionable than the idea of voting for Donald Trump to run the free world.  This Sunday, look for Scott to score a shamefully easy goal about 30 seconds after taking the ice, and for the All-Star Game as a whole to be entertaining for exactly as long as it takes for this to happen. Be prepared for half-speed 3-on-3 to look like a woefully under-attended Timbits game. You can also expect some brief chatter about whether or not Erik Karlsson is the kind of defenseman who should win Norris Trophies after he scores a goal while texting. Erik Karlsson 5, All Others 0.

Next week: Edmonton, the only franchise it’s impossible to joke about.