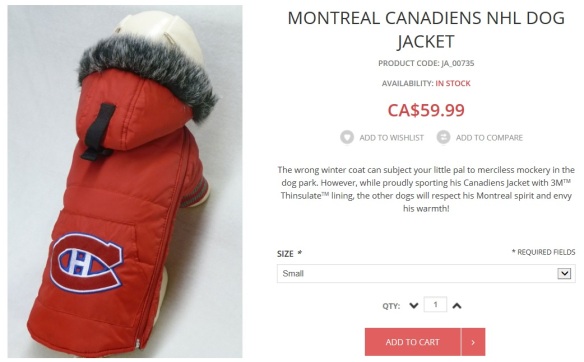 The Hockey Sweater reboot no one asked for

It’s almost April, you’re almost out of it, you’ve shut down half your roster with the kind of injuries that are only suffered by non-playoff teams . . . even the most dedicated hater packs it in at that point, right? But that’s where you’re so wrong, idiot. After all, no season, even a losing one, is truly over until you’ve had a chance to spoil the aspirations of other, more successful competitors. God doesn’t close a hater’s door without opening a window through which that hater gonna continue hating.

First up this week is the Winnipeg Jets . . . who I’m being told were eliminated from the playoff hunt last week. So unfortunately there’s nothing to spoil here, as the Jets have already curdled like milk on a hot Winnipeg sidewalk. Don’t forget that the Jets, a playoff team last year, didn’t make any major roster improvements going into this season, believing that their core would continue to consolidate and their young players would continue taking steps forward. Come on, when does that actually work? My informed suggestion for the Jets is that they spend the offseason getting rid of all their players for better ones.

PREDICTION: But wait, you’re saying. As the last Canadian team standing, surely it is the Jets who will be looking to spoil things for the Senators. Yes, probably. But they won’t. Look for Andrew Hammond to let in negative goals. How will he do that, you’re asking. Well, he’ll get a shutout, and also score one, I guess. Okay, you’re saying, so that might mean he’s directly responsible for a positive goal differential, but that’s not the same as allowing negative goals; you can’t actually allow negative goals. Right, I tell you, I’m just trying to turn a phrase here, and anyway, directionally, the effect is equivalent, isn’t it? Yes, but it’s a false equivalency, you respond. “A false equivalency,” I repeat to you in a mocking, sing-song voice. Senators 5, Jets 0.

Ah, here we go, a team still in the playoff hunt. The Minnesota Wild, a team that 15 years post-expansion still has a name and uniforms like a fake hockey team in a Rob Schneider movie – let’s say one where he’s a down-on-his-luck dog groomer who accidentally kills his local team’s starting goaltender with a pair of clippers while trying to trim the guy’s standoffish Bichon Frise, and has to cover it up by putting on a mask, faking a semi-racist French accent, and leading the “Minnesota Wild” to the “Stanfield Cup” while also convincing his estranged teen daughter he’s still a good dad – are hanging on to the last Wild Card spot in the Western Conference, five points ahead of the “Colorado Avalanche” with five games to play. I had to look that up, but let’s be honest – you hadn’t even heard of either of those teams until I told you just now.

On the face of things, it looks like the Wild have a pretty good shot at making the postseason so they can lose to the Blackhawks for a fourth year in a row. But you know all those things people make fun of the Senators for? The Wild have done them even more embarrassingly. You know how the Senators drafted Alexandre Daigle and paid him too much money? The Wild gave him another job after he ran out. You know how the Senators fly Stanley Cup banners that weren’t won by the modern franchise? The Wild retired the number 1, in honour of their fans, before they’d played a single home game. Good luck signing Ray Emery, guys. You know how the Senators play way west of town? The Wild play all the way out in the Central Time Zone. They are a cheap photocopy of an unflattering picture of a better franchise, and they will lose this game.

PREDICTION: The outcome here is a foregone conclusion, so rather than predict the details, let me tell you why Bryan Murray made the Shane Prince trade. He made it in anticipation of this game in Minneapolis. He made it because Prince, the musician, shows up at Wild games from time to time – he has his own purple velvet box – and after watching the Senators embarrass the Wild at home, he’s going to find Murray after the game and say something dramatic like, “I see you’ve lost a Prince. Well tonight, you gain another.” And then he’ll buy Milan Michalek’s house (a man who’s no stranger to purple, BTW)  in the offseason, replace the Senators’ in-game organist, and spend every play stoppage ripping off guitar solos which continue well after the puck is dropped. The Senators will win every game in this environment, and it will start with this one. Senators 5, Wild 0.

This is a tough one. On the one hand, we all hate the Flyers, right? Philadelphia has made a late-season rally to get into playoff position, and would anything be sweeter than if the Senators, the team that made the run of all runs last season, were also the team to truly spoil things for the Flyers this year, just to highlight how unique their run last season really was? On the other hand, the Flyers making the playoffs most likely means an end to one of the most celebrated boring records in sports, that being the Detroit Red Wings’ 24-year playoff streak. And who doesn’t hate the Red Wings? Nobody, that’s who.

So the real question is whose season is best spoiled? The answer in this case is the Detroit Red Wings. And maybe a year off will do you some good, Detroit. More time to travel, to have a few new experiences, to develop more personality. Come back as something other than a consistent, dishwater-dull hockey team where everybody has the same haircut. Missing the playoffs isn’t the end of the world, Detroit. It instills a hunger in you, deep down, the kind of hunger where you tell yourself you’ll do anything it takes to get back to where you were, even if you only barely scrape back there, no matter what it costs. Hey, have you guys thought about trading for a veteran defenseman?

PREDICTION: Look for the Senators, in their wisdom, to ignore me and exert their influence over only those matters that are within their control. Senators 5, Flyers 0.

Next week: We cross the finish line, unbowed, unbroken.